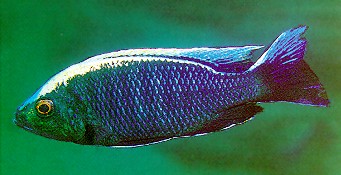 Above: Copadichromis ilesi (which has been known as Copadichromis "virginalis kajose"), the third of the three new Utaka species described by Konings (1999), along with C. trewavasae and C. geertsi. The fish above is a male, photographed underwater at Gome, Malawi (the type locality). (Once again, Konings did not illustrate any of his type specimens of this species, which are deposited in the Musťe royal de l'Afrique Centrale in Tervuren, Belgium.)

The diagnosis for C. ilesi states:

A small cichlid of the genus Copadichromis without spots on the flanks, a member of the 'pure Utaka.' Breeding males are black with a creamy white to yellow 'blaze' and attain about 114 mm in standard length. It differs from other 'pure Utaka' by having more gill rakers (21 to 25) than C. flavimanus and C. inornatus (both fewer than 18), a deeper body than C. mloto, and a shallower body and longer snout than C. virginalis.   (Konings, 1999)

Photo by Ad Konings, used by his kind permission and that of T.F.H. Publications, Inc.