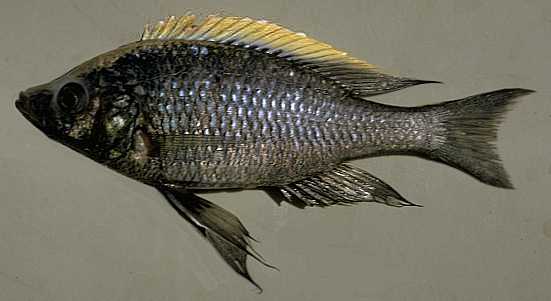 Above: Copadichromis mloto (or a very similar species!). This is one of the "Utaka" species, which shoal in open water and feed on zooplankton.

At right is an animation, made using two still photos of the above freshly killed male specimen trawled in the southeast arm. The animation shows the mouth closed and then opened (see also the pair of still enlargements), roughly as it appears in this and other utaka species when the upper jaw snaps forward for an instant (much faster than is depicted here) to form a sucking tube. This action causes a negative pressure in the oropharynx or mouth cavity, because the opercula (gill covers) are kept tightly closed while the mouth is being protruded. The negative pressure apparently pulls the chosen zooplankton organism into the mouth along with the inrushing water. The fish's gill rakers assist feeding by straining the plankters from the water as it is expelled when the opercula are opened. This and other zooplankton-feeding "utaka" species form shoals for feeding purposes, often in areas of upwelling where the current carries planktonic crustaceans. The fishes apparently select individual plankters (note the large eyes); each fish in the shoal faces into the current and adjusts its head slightly up or down as it prepares to ingest each organism that drifts near its jaws. (More photos are below. Animation and all photos © by M.K. Oliver.)

Below is a photo of another individual probably of C. mloto, from Nkhata Bay. Below the photo is a drawing of the holotype, also from Nkhata Bay, 93 mm (fork length?), from Iles (1960: fig. 2). 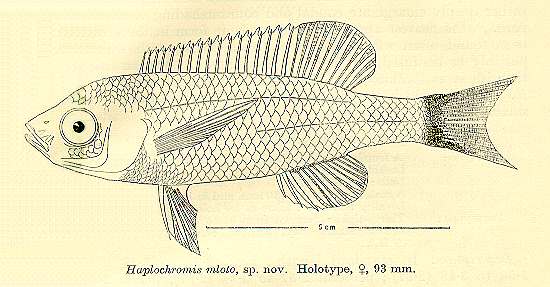