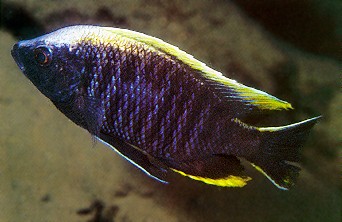 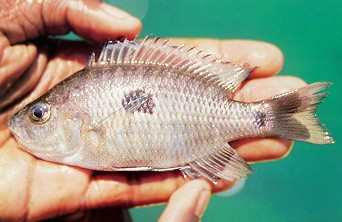 Above: Copadichromis geertsi (which has been known as Copadichromis "virginalis blotch"), another of three new Utaka species described by Konings (1999). (The others are C. trewavasae and C. ilesi.). The colorful fish is a male, photographed underwater at Gome, Malawi (the type locality). The pale fish with spots is a female, also from Gome, Malawi. (Konings did not identify either of the illustrated fishes as type specimens; the types are deposited in the Musťe royal de l'Afrique Centrale in Tervuren, Belgium.)

A small to medium-sized cichlid of the genus Copadichromis with two, sometimes only one, distinct spots on the flank, dark pigmented males with a light blue to yellow upper anterior body and dorsal fin, and attaining about 128 mm in SL. It differs from other Copadichromis species with two spots by the male breeding color (black with a light blue to yellow 'blaze' on head and dorsum). It has more gill rakers (23 to 25) than C. pleurostigma (17 to 18) and a shorter caudal peduncle (6.9 to 7.4 in SL) than C. likomae (5.6 to 6.8 in SL). It has longer pectoral fins (2.5 to 2.8 in SL) than C. jacksoni (3.1 to 3.8 in SL) and males have longer pelvic fins (1.9 to 2.0 in SL) than C. pleurostigmoides (more than 2.15 times in SL); females and immature males lack the yellow color in the anal fin seen in C. pleurostigmoides.   (Konings, 1999)

Photos by Ad Konings, used by his kind permission and that of T.F.H. Publications, Inc.