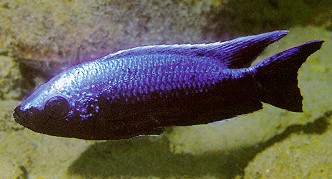 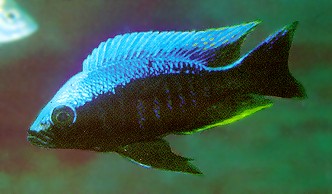 Above: Copadichromis trewavasae (which has been known as Copadichromis "virginalis mloto Likoma") is one of three new Utaka species described by Konings (1999). (The other two are C. geertsi and C. ilesi.) Both of the C. trewavasae above are males. The one with its dorsal fin lowered was photographed underwater at Lupingu, Tanzania; that with its dorsal raised, at Makonde, Tanzania. [The type locality of this species is Membe Point, Likoma Island, Malawi. Several of the paratypes came from Chizumulu (Chisumulu) Island. Konings did not illustrate any of his type specimens, which are deposited in the Musťe royal de l'Afrique Centrale in Tervuren, Belgium.]

Scroll down for an underwater photo of a female, photographed underwater at Chizumulu (Chisumulu) Island, showing the spot pattern shared by this and several other Utaka species. According to Konings' diagnosis, C. trewavasae differs from other three-spotted Copadichromis species

All photos by Ad Konings, used by his kind permission and that of T.F.H. Publications, Inc.