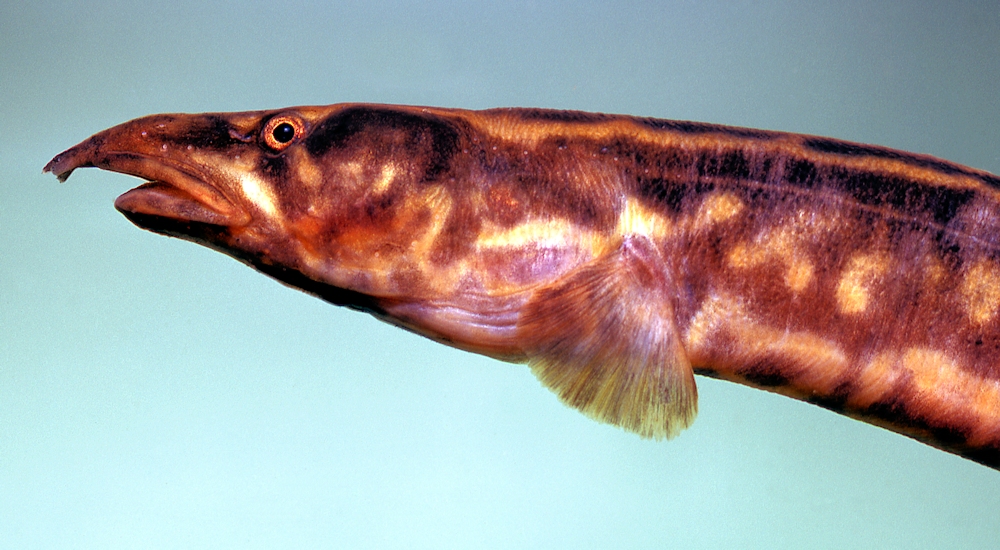 Aethiomastacembelus shiranus is currently the accepted name for Lake Malawi's spiny eel (photos copyright © by M. K. Oliver). In the past, it was first called Mastacembelus shiranus and then Afromastacembelus shiranus. (An indigenous name for it is "nkhungu.") This eellike fish (not closely related to true eels such as L. Malawi's thick-lipped eel) lives among weeds and rocks in the lower parts of streams that flow into L. Malawi, as well as in the lake itself, in shallow water. Specimens as long as 26 cm (10¼ inches) in total length have been collected. Jackson (1961) reported that this highly reclusive fish feeds on insects and other small invertebrates.

Three individuals (126-185 mm SL) were collected from two floating islands in the southwest arm of Lake Malawi (Oliver & McKaye, 1982). These masses of reeds had broken away from the extensive lakeshore swamps in the southwest arm and were drifting over open water more than 10 meters deep. Eventually, the vegetation breaks up against another stretch of shoreline or a rocky island, where the habitat may or may not be suitable for the floating island's passengers. Such dispersal may help to maintain genetic homogeneity among lakeshore populations of A. shiranus and the other swamp-dwelling species that hitch a ride with the drifting vegetation. Occasionally, floating islands might even establish populations in new areas, potentially promoting differentiation and speciation. (Text continues following photo below) 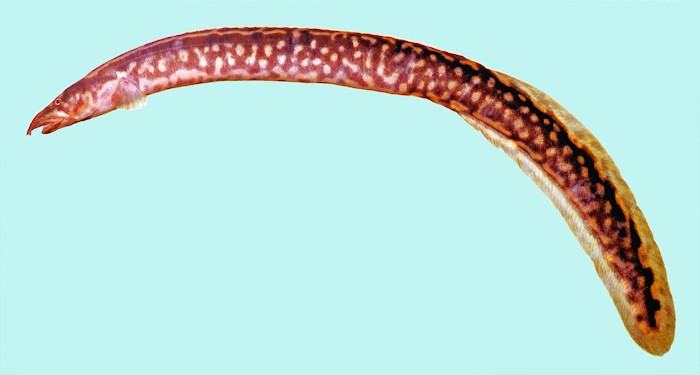 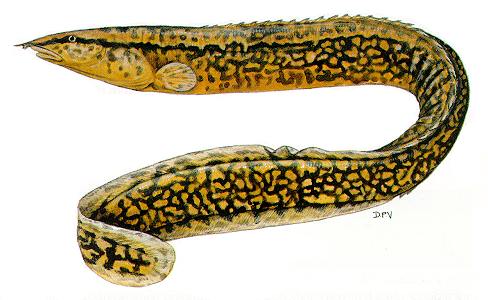 The specimen in my photos (above), obviously, is strongly patterned, as is the individual of A. shiranus in the painting at right (from Skelton, 1993), and also the one in the drawing at FishBase. However, Konings (1990: 473) illustrated what he thought was A. shiranus with color photos of two plain, unmarked spiny eels (from Otter Island and Thumbi Island East, both on the Nankhumba Peninsula, Malawi), describing their coloration as "dull gray ... without any markings."

See my page on Aethiomastacembelus sp. "Rosette" for discussion of a third color form in the spiny eel(s) in Lake Malawi, and further discussion of variation in the coloration of spiny eels.

All in all, it is quite unclear whether one, two, or three species of spiny eel are represented in the photos discussed on these pages. Only the collection and comparative anatomical (and perhaps genetic) study of series of mastacembelid specimens can resolve this question definitively.

For now, Lake Malawi has only one confirmed species of spiny eel, A. shiranus (but again, see A. sp. "Rosette"). In contrast, Lake Tanganyika has a small species flock of spiny eels. Yet Lake Malawi's cichlid species far outnumber those of L. Tanganyika. A similar situation exists with respect to Synodontis catfishes, with one Lake Malawi species but several in Lake Tanganyika. It is true that Lake Tanganyika is several times as old as Lake Malawi, but this alone seems inadequate to explain the disparity. No one has proposed a convincing reason why these families should have speciated to such different degrees in the two, otherise quite similar, lakes.

Credits: The color paintings of A. shiranus (by Dave Voorvelt) and A. frenatus (by Elizabeth Tarr), seen above, are copyright © by the South African Institute for Aquatic Biodiversity (formerly known as the J.L.B. Smith Institute of Ichthyology). They are reproduced here from Skelton (1993) with the kind permission of Prof. P.H. Skelton.