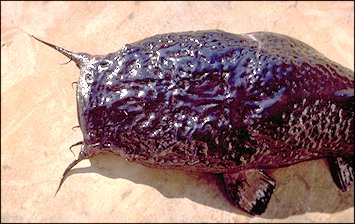 This unusual, pockmarked deepwater catfish is Bathyclarias foveolatus. The specimen (USNM 265800) was collected 21 July 1980 off Nkhata Bay, Malawi by M.K. Oliver, K. McKaye, and T. Kocher and was alive when I photographed it. So far as I can determine, this is the only museum specimen collected since the species was described from three type specimens by Peter B.N. Jackson (1955).

The small, laterally placed eyes that bulge out from the outline of the head, a key characteristic for distinguishing Bathyclarias from Clarias, can be seen in the close-up of the head at right. B. foveolatus (called "Chimwamapumba" locally) is piscivorous according to Jackson (1961), who remarks that "it is probably sluggish in habits, skulking among the rocks and mud at great depths; it is invariably caught in the bottom few meshes of deep-set gill nets. Of no economic importance as many Africans refuse to eat it, fearing that smallpox might be contracted from its pock-marked skin. Grows to 70 cm. or more." Both photos © 1999 by M. K. Oliver.