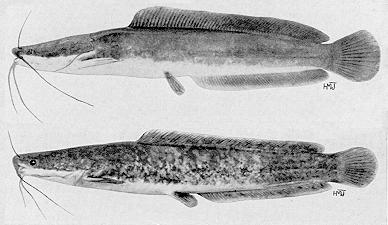 Clarias gariepinus, of which Clarias mossambicus is now considered a junior synonym, is one of the three clariid catfishes known from Lake Malawi that are not endemic there and are widely distributed. Indeed, Skelton (1993: 230) calls C. gariepinus "[p]robably the most widely distributed fish in Africa, found throughout woodland-savanna zones of the Afrotropical region from the Nile to as far south as the Orange system and the Umtamvuna (east coast)."

The largest known individual measured 1.4 meters (55 inches) in standard length (without caudal fin), and weighed 59 kg (130 pounds). The record individual from the country of Malawi was 16.1 kg (35½ pounds) according to Skelton (1993), but probably was not from Lake Malawi.

Jackson (1961: 553) noted that the indigenous name in Malawi is "Mlamba," and recorded the following interesting observations about this species (as C. mossambicus):

This catfish is the commonest species in rivers, lagoons and estuaries and is not representative of the open lake, though occasionally venturing into it, especially opposite rivers when they are in flood. Very tolerant to muddy water and conditions of low dissolved oxygen. Omnivorous, a general scavenger. Seen tearing at skinned crocodile carcasses at Bana [on the west-central Malawi coast of the lake].... Of considerable importance as a food fish particularly in inland areas. Grows to 60 cm. or more.

C. gariepinus lacks an adipose dorsal fin, in contrast to C. ngamensis, and has a longer head than C. theodorae.

All three of these nonendemic Clarias species can be distinguished from the numerous deep-water endemic Lake Malawi clariids of the genus Bathyclarias by the position of the eyes. In Clarias, the eyes are situated more dorsally on the head, so that when the fish is seen from below they are not visible. In Bathyclarias, the eyes are lateral, so that they bulge out from the head outline when the fish is viewed from above or below.

Recently, Agnese and Teugels (2001) have asserted that C. gariepinus is the ancestor of the Bathyclarias species flock. However, many systematic biologists reject on logical grounds any such claim that an ancestral species can split, or speciate, into descendent or daughter species, yet still persist as the same unchanged ancestor. If a living ancestor is presumed to be identified, a convention for classifying it has been proposed by E.O. Wiley.

The above illustrations by Hilda M. Jubb, figures 143A and 143B from Jubb (1967), are used by kind permission of Mr. A. T. Balkema of A. A. Balkema Publishers, Rotterdam.