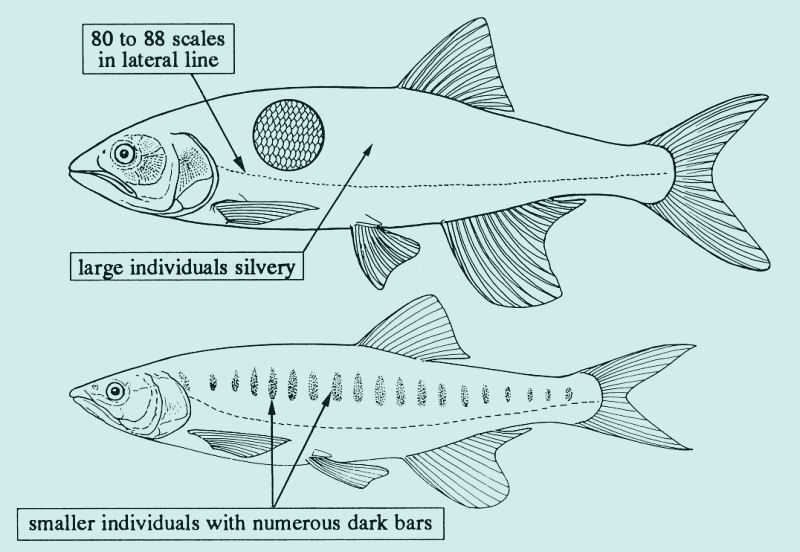 Above: The "Mpasa" (Opsaridium microlepis) of Lake Malawi is a predatory pelagic minnow that attains a length of around 50 cm (20 inches). [Drawing by P. Lastrico, reproduced from Eccles (1992) with the permission of the Food and Agriculture Organization of the United Nations.]

Mpasa can be distinguished from their close relative in Lake Malawi, the "Sanjika," by having much smaller scales (80 or more in the lateral line, versus 47-52 in the Sanjika). Moreover, adult Mpasa lose the vertical dark bars of juveniles, becoming plain silvery.

Jackson (1961) noted, "Juveniles are commonly seen along the shores of the open lake, grabbing plankton and any other animal matter. Caught trolling from boats, prefers a bright silver spinner to one of any other colour. Often caught by African fishermen in the lake by this method; one caught 27 while crossing [Mbampa] Bay, Likoma Island, in his canoe by trailing a spinner behind it."

Adult Mpasa migrate out of the lake into rivers to breed. Morioka and Kaunda (2004) counted the daily growth rings in the otoliths of young Mpasa to back-calculate when they had been spawned. This showed that the breeding period extends from May to October. The young remain in the rivers and grow there before swimming into the lake.