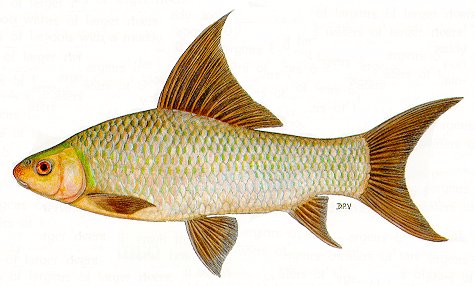 The "Manyame labeo," Labeo altivelis, with its tall, saillike dorsal fin, is a distinctive species only recently added to checklists of the known fauna of Lake Malawi. [FishBase mistakenly lists the common name as "rednose labeo" but this is from a misreading of Skelton (1993); that is what Skelton called L. rosae, the next species in his book.]

The occurrence of L. altivelis in Lake Malawi needs confirmation. In his revision of African species of Labeo, Reid (1985) reported it from the lake, but this rests on the inclusion of "L. Nyassa" (and the Shiré River) in the geographic distribution of L. altivelis in volume 1 of Boulenger's Catalogue (1909: 310) (G. M. Reid, in litt. 19 Oct. 1999). Reid's mention of L. Malawi in the range of L. altivelis is repeated in the species summary at FishBase. This labeo is also found in the upper Congo River system in Zambia (the Chambeshi, Bangweulu, and Luapula), and in the middle and lower Zambezi, Pungwe, Buzi, and Save River systems (Skelton, 1993).

Skelton notes that this labeo grows to 40 cm (15¾ inches) total length and 3.6 kg (7.9 pounds), but the record size in Malawi is much smaller (0.52 kg or 1.15 pounds). "Prefers large rivers but is also found in large lakes and dams. Grazes on algae and 'aufwuchs' from rocks" (Skelton, 1993). (The Lake Malawi cichlid genus Labeotropheus was so named because it has a similar underslung, algae-grazing mouth.) Breeding, according to Skelton, takes place in summer when the rainy season has started, the fish migrating upstream into tributaries.

The above color painting by Dave Voorvelt is copyright © by the South African Institute for Aquatic Biodiversity (formerly known as the J.L.B. Smith Institute of Ichthyology). It is reproduced here from Skelton (1993) with the kind permission of Prof. P.H. Skelton.