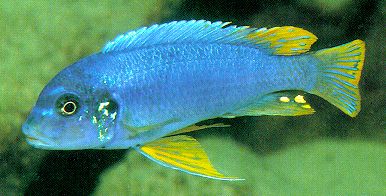 A male Pseudotropheus "aggressive yellow fin" photographed at Mkanila Bay, Chisumulu (Chizumulu) Island. This beautiful Pseudotropheus "aggressive" species, seemingly confined to Chisumulu, is reported to occur there only among rocks of small to medium size in less than 6 m depth, always remaining close to the rocks (Ribbink et al., 1983). Most males have algal "gardens." Unlike a majority of the other "aggressives," however, in this species the females seem to be nonterritorial according to Ribbink and colleagues. Photo by Ad Konings, reproduced from Konings (1995c) by his kind permission.