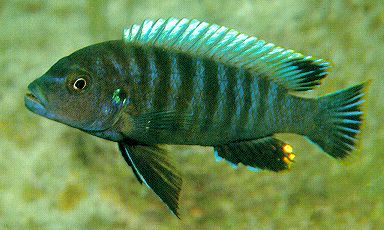 Large photo: Pseudotropheus "aggressive gray," a male photographed at Maingano, Likoma Island. Photo by Ad Konings, reproduced with his permission from Konings (1995c). Small photo: Another individual at Likoma Island, from Plate 8c of Ribbink et al., 1983; reproduced by permission of the Zoological Society of Southern Africa. As with the other Pseudotropheus "aggressives," males and females of this scientifically still-unnamed species are highly territorial and thus frequently able to defend filamentous-algae "gardens" within the territory. This species should not be confused with P. "aggressive gray head."