The beautiful cichlid above is a young Maylandia livingstonii (photo copyright © by M. K. Oliver). I took the photo in Malawi in 1971, probably the first of a living individual. I also hand-carried a bag of live individuals back to the USA in 1971, the first ones of their species to be maintained outside of Malawi.

The species was named by Boulenger in 1899 for the great Scottish explorer-missionary, David Livingstone. Note the highly distinctive, brightly marked caudal fin, with alternating pale blue and orange stripes. The photo below right (also taken in Malawi in 1971, copyright © by M. K. Oliver) shows 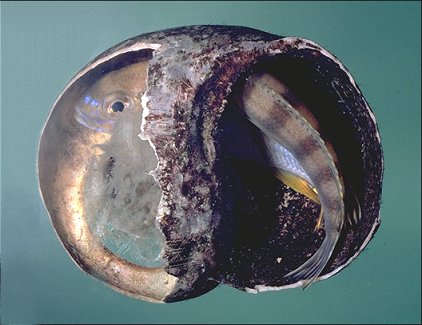 an individual of this species hiding in the empty shell of a Lanistes "apple snail," probably L. solidus. [This snail was previously identified as Lanistes nyassanus (Gray, 1980); there are thought to be three endemic species of Lanistes — L. solidus, L. nasutus, and L. nyassanus — and at least one nonendemic species (L. ellipticus) in Lake Malawi.] The shell has been partly broken open to show how the fish curls head-first into the vacant shell. Notice how the contrastingly striped caudal fin of the cichlid remains visible against the dark-colored opening of the snail. (A photo of a living Lanistes solidus snail, taken by Danish aquarist Carsten Larsen, is displayed on his site, MalawiCarsten.)

Both the snails (and their empty shells) and this cichlid species are locally common on sandy shores of Lake Malawi. I suggest that the unusual fin coloration is an adaptation used by these small cichlids as a visible cue to others of its species that the shell is already occupied, perhaps thereby avoiding an energetically expensive out-of-shell confrontation with a conspecific, an interaction that would also make this small fish vulnerable to the many sandy shore predatory cichlids. The caudal stripes become much less prominent on adults, which appear to outgrow the shells and then must stop hiding in them (see Photo f at bottom of this page). Maylandia elegans, sister species of M. livingstonii, has similar shell-entering habits when immature.

There is another, extremely interesting facet to this story of the young cichlid that seeks refuge in an empty snail shell: There is also a tiny catfish that sometimes shares the shell with the cichlid! It is not definitely identified, but is in the family Amphiliidae, and probably belongs in the genus Zaireichthys (formerly thought to be a Leptoglanis). Quite possibly, it is a member of the Zaireichthys rotundiceps complex. The catfish is unknown in Lake Malawi outside of the Lanistes shells. The catfish's sharing of the shelter of the shell with the cichlid is an example of inquilinism, and the catfish is an inquiline. An inquiline is defined as "an animal living in the home of another and sharing its food ... [or] an organism that lives on or within the body of another, or in its nest or abode, without benefit or damage to either" (definition from Torre Bueno's Glossary for Social Insects).