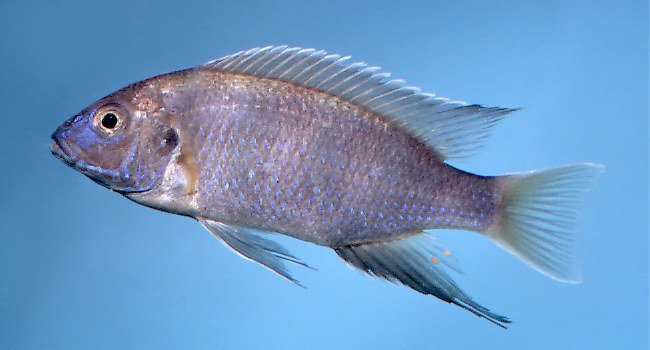 The above adult male Maylandia elegans was trawled on 5 August 1971 in 60-90 feet (18-27 meters) off Chembe, Cape Maclear, in southern Lake Malawi (photo copyright © by M. K. Oliver). This species was originally named Pseudotropheus elegans by Trewavas in 1935. Like its close relative Maylandia livingstonii, M. elegans lives not over the rocks, like most members of the mbuna species flock, but primarily on sandy shores, up to and including the sand-rock interface. Both species also share a silvery purple-pink ground coloration, wide vertical bars (sometimes indistinct), and whitish upper and lower edges to the caudal fin. Furthermore, the young of both species occupy the large empty shells of a snail, currently identified as Lanistes solidus. Members of the genus Lanistes are often called "apple snails."

Maylandia elegans is rarely, if ever, exported to the aquarium trade, although it is widely distributed around the lake. Not much is known of its biology. The maximum size of around 15 cm (6 inches) is larger than that of most mbuna. 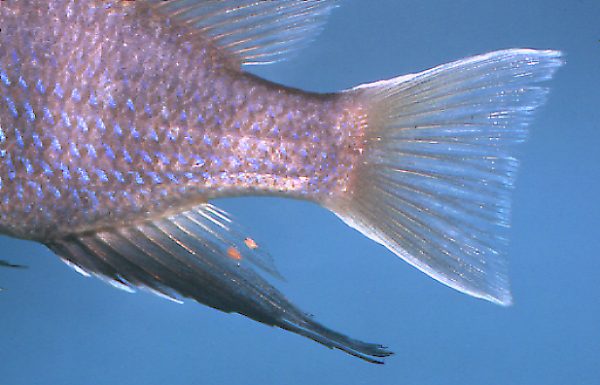 According to Ribbink et al. (1983: 160), its known depth range extends from 6-76 m (20-250 feet). These authors reported that stomachs of 58 specimens from a depth of 30 m contained "78% benthic Invertebrata, 12% phytoplankton, 6% zooplankton, and 4% loose Aufwuchs, mainly diatoms." Apparently, nothing is known about the breeding of M. elegans, although Konings (1995c) had found young in empty Lanistes shells. An all-male aggregation of hundreds of individuals was noted by Ribbink et al. (1983).

Ad Konings reports and illustrates that M. elegans is among the cichlids specifically mimicked by some individuals of the polymorphic, lepidophagous (scale-eating) mbuna, Genyochromis mento. The similarity does not appear very convincing, to judge by the pair of photos supplied with the article, but perhaps research will substantiate this additional case of aggressive mimicry.