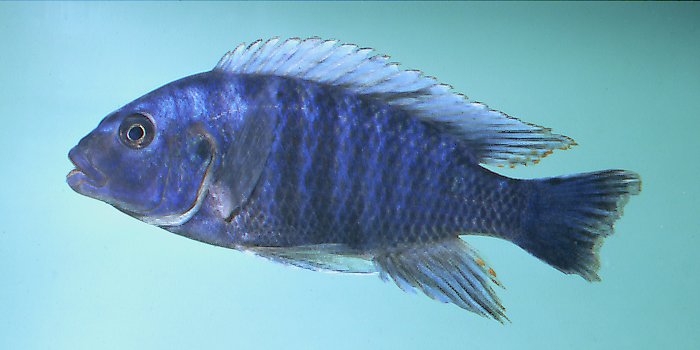 Above: This magnificent male Petrotilapia is tentatively identified as belonging to P. tridentiger, type species of the genus. It was collected 1 Aug 1971 by seining in less than a meter (3 feet) of water on a cobble beach at Chingubi Point, near Malabwe, Malawi, in the southeast arm of the lake, by M.K. Oliver and D.H. Eccles. Photo © by M.K. Oliver.

This and other species of Petrotilapia are Mbuna which attain a larger size in the wild than other Mbuna, around 15 cm (6 inches) total length. The jaws are flared apart anteriorly even when the mouth is closed, which makes a good recognition character for members of the genus Petrotilapia. However, identifying them to species is a challenge; around 20 species are now known, differing principally by male coloration, and most species remain undescribed.

The teeth are long, slender, and tricuspid, and are arranged in numerous rows, forming a sort of brush (see drawing of Petrotilapia mumboensis). Individuals of Petrotilapia species use this specialized dentition to comb loose Aufwuchs (diatoms, unicellular algae, bacteria, protozoans, small insect larvae, and organic detritus) from the strands of filamentous algae that are firmly attached to rock surfaces. They feed with the jaws pressed against the rock while the body is held perpendicular to the surface (Ribbink et al., 1983). However, although anatomically specialized for collecting loose Aufwuchs, P. tridentiger is quite an omnivore that preferentially eats zooplankton, phytoplankton, detritus, fish fry, and fish eggs when these items are available (McKaye & Marsh, 1983). These authors hypothesized "...that the morphological specializations become critically important when food resources are low and effective cropping is required."

In the aquarium, species of Petrotilapia do well, but only if provided with a really large tank (preferably more than 200 gallons or 750 liters). This requirement is due not only to their large body size, but also to their behavior. In the wild, males of P. tridentiger at Monkey Bay defend territories averaging 22 m2 or 237 ft2 (Marsh, Ribbink, & Marsh, 1981)!

Note: Petrotilapia tridentiger should not be confused with the quite different Mbuna Iodotropheus sprengerae, which was widely sold under that name when first imported to America in the late 1960s and early '70s.