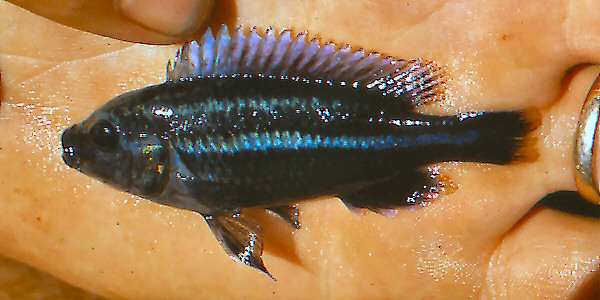 Above: I had just caught this male Melanochromis vermivorus on hook and line at Thumbi Island East in Monkey Bay, Malawi, and photographed it to show the iridescent blue-purple dorsal fin typical of males at this locality. Photo copyright © by M. K. Oliver.

M. vermivorus is a member of the M. melanopterus species-complex, according to Ribbink et al. (1983). It lives on rocky shores that are exposed and free of sediment, at depths of 0 to 30 meters (100 feet). Duponchelle et al. (2000d) present some visual census data indicating that, at least during the rainy season at Thumbi Island West, this species is considerably more abundant at a depth of 2 meters (6 feet) than at greater depths.

Ribbink et al. report that, depending on locality and varying local conditions, M. vermivorus eats loose Aufwuchs, filamentous algae, benthic invertebrates, zooplankton, and phytoplankton. These authors stated, "Apparently this species feeds on plankton when it is available, but on components of the Aufwuchs at other times." (Aufwuchs is the term used for the mat of filamentous algae that are firmly attached to rocks, together with the single-celled algae, bacteria, diatoms, and protozoa that live among the filaments; benthic invertebrates including insect larvae, small molluscs, and crustaceans in this algal mat; and also the organic detritus present there.)