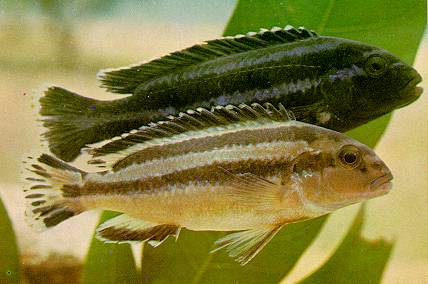 Above: Melanochromis loriae. The individuals shown are the freshly killed and fixed holotype and paratype of M. parallelus, a species recently synonymized with M. loriae by Konings & Stauffer (2012). The holotype is the lower, female fish (USNM 215029, reportedly 77.9 mm SL); the paratype is the upper, male fish (USNM 215030, said to be 83.2 mm SL). The photo is by H. R. Axelrod, and is reproduced from the original description of M. parallelus Burgess & Axelrod (1976), by permission of T.F.H. Publications, Inc. These authors, unfortunately, reported the type locality (where the type specimens were collected) only as "Lake Malawi." Later, Ribbink et al. (1983: 205) reported finding this species along the north-west shore of the lake and at both Likoma and Chisumulu Islands.

Females of M. loriae are often much whiter than the female illustrated here. This species is, in fact, sometimes marketed to hobbyists as the "Black and White Auratus." Females of M. loriae also can be distinguished from M. auratus by the symmetrical black markings in the upper and lower halves of the caudal (tail) fin; in contrast, M. auratus have the black markings confined to the upper half of the fin.

The diet of M. loriae is generally omnivorous. Konings (1995c), however, has published some fascinating observations about a considerably more unusual feeding behavior that he has observed, which I quote almost in full because of their importance:

M. parallelus [M. loriae] and M. vermivorus are both found in the sediment-free rocky habitat and show distinct sexual dichromatism [i.e., males and females are colored differently]. These two species, although more numerous than [M. melanopterus], are likewise omnivores which feed primarily on invertebrates but nip from the biocover as well. When plankton is abundant they also join with other mbuna in feeding in the water column. A diver may attract several of them when debris is stirred up by his fins. Both species feed opportunistically, but I have observed another, most remarkable type of feeding behaviour in M. parallelus [M. loriae]. Eccles and Lewis (1976) describe the cleaning behaviour of juvenile Docimodus evelynae which feed on the fungus and parasites attached to larger haplochromines.... After the rainy season, which is an important breeding period for many species, several larger haplochromines have damaged fins or scales. These wounds are covered with fungus which prevents rapid healing. On several occasions I have observed adult females of M. parallelus picking fungus from larger haplochromines. In all instances the wounded fish approached the »cleaner« and made clear, by lying on its side or hovering in a slanting, head-up position, that it would like to have a »treatment«. In all cases the dorsal fin was presented first. The female »Parallelus« then picked vigorously at the fungus and tore it off. Although it visibly hurt the »client« it remained in the typical position. When all its wounds were cleaned, which might take more than a minute, the larger haplochromine would resume its normal position and disappear. Cleaning stations, as seen in marine fishes, were not observed: after the job was done the female Parallelus would disappear from the scene as well. George Turner (pers. comm.) once found a juvenile M. auratus with a cleaning station based around a small rock at the edge of a breeding colony of a Copadichromis species. Several utaka and rock-dwelling species have been observed being cleaned, but in all instances these were large »haps«, never mbuna. —Konings (1995c: 95-97)

As an aquarium resident, Melanochromis loriae is typical of its genus — it is highly aggressive. It is not a species for the beginner at keeping Malawi cichlids (although it is commercially pond-raised and so is frequently sold in pet departments and stores). A single male and several females make the most desirable group (and the group least prone to serial murder by the dominant male). Ample rocks or other territory markers and hiding places must be provided.