Above: Abactochromis labrosus (Trewavas, 1935) is a somewhat enigmatic Mbuna species, a rarely encountered skulker on rocky shores. The subadult individual above was about 55 mm (2.2 inches) standard length (SL, excluding caudal fin) and 67 mm (2.7 inches) total length. It was collected (part of collection field number MKO80-72) on 21 July 1980 by M.K. Oliver, K. McKaye, and T. Kocher using rotenone and SCUBA at Nkhata Bay, Malawi, in the north bay along the peninsula, about 15 meters from its tip. We spread the rotenone to a depth of 50 feet (15 m) on this rocky shore, which lacked any macrophytes (higher plants). Photo copyright © by M.K. Oliver.

It has been evident to many scientists and aquarists for years that this species, originally named Melanochromis labrosus, is not closely related to the other cichlids placed in the genus Melanochromis. It's not just that it is unusual, with those enlarged, rubbery lips; those could have evolved in a species of Melanochromis, as they have in many other cichlids. The most important feature preventing A. labrosus from inclusion in Melanochromis is that it has a color pattern only of primitive vertical bars, instead of the highly distinctive pair of horizontal stripes (typically with opposite light/dark arrangement in males and females) found in Melanochromis; for example, in M. auratus. In addition, "M." labrosus has more gill rakers, and fewer vertebrae, than proper members of the genus Melanochromis. Nor could this species be plausibly classified in any other existing genus. There has even been disagreement as to whether it is a member of the Mbuna group, or of the "hap" (non-Mbuna Malawi haplochromine) group. I myself once believed it was a "hap," not an Mbuna. (I have changed my mind; the balance of evidence indicates it most likely does belong with the Mbuna.) Therefore, Dr. Matt Arnegard and I recently described a new genus, Abactochromis, to contain it (Oliver & Arnegard, 2010). You can download this paper to read for yourself; it also contains illustrations of A. labrosus with anatomical details, a discussion of the characteristics supposed by many writers to define the Mbuna group (it turns out that these features don't do it satisfactorily), a survey of the number of vertebrae in all 13 Mbuna genera, and a key to these genera.

Below: A large adult male Abactochromis labrosus (the largest ever collected) is shown in overall lateral view and in close-ups of the underside of the laterally compressed head and of the anal fin with its remarkable orange-red eggspots (all photos copyright © by M.K. Oliver). This fully grown individual measured 119 mm (4.7 inches) SL, which must be close to the maximum size this species attains in the wild. The fleshy median lobes of the lips have been moved forward to show their length and fullness. Matt Arnegard and I discovered that these lips are densely covered with taste buds; see our paper for the details. This individual was collected from trammel and experimental gill nets set overnight 24-25 July 1980 (MKO80-84), by the same people as for the smaller fish depicted above, again in Nkhata Bay (this time off the southern shore of the south bay near emergent offshore rocks, some 75 meters from shore). Capture depth ranged from 6 to 45 meters; unfortunately, the exact depth at which this fish was caught is unknown. This was a rocky locality devoid of any macrophytes and exposed to wave action from easterly and southeasterly winds. (Text continued below photo.)

Two other individuals (not photographed) were collected on 23 July 1980 (part of MKO80-79) by M.K. Oliver, K. McKaye, and T. Kocher. They were captured with SCUBA at Nkhata Bay, off the tip of the peninsula separating the north and south bays, using rotenone dispersed among rocks in a depth of 17-20 meters (55-65 feet). At this locality, the rocky shore dropped off rapidly, at an angle of 45°-75°. Higher plants were completely lacking; filamentous algae grew to a length of 5 mm (0.2 inches).

This species has sometimes been confused with a "hap," the only distantly related Placidochromis milomo Oliver, which, among other differences, has larger thoracic scales, reaches a much larger size, and has only four vertical bars below the dorsal fin (vs. about seven in A. labrosus). A couple of major American museums have P. milomo specimens whose ichthyologist collectors deposited them as "Melanochromis labrosus"! This further illustrates the Mbuna-versus-"hap" confusion affecting this puzzling taxon, the only one of the 800 or so cichlids in Lake Malawi whose placement has been confused to this degree.

Abactochromis labrosus is rarely seen. The commercial aquarium collector and his staff handle only 5-10 per year, out of approximately 75,000 fish (the late Stuart Grant, in litt. 6/1999). 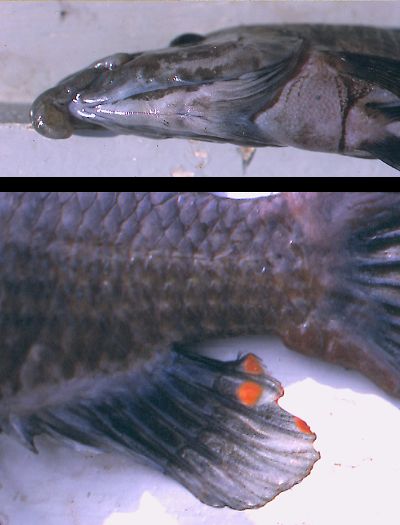 It has been (rarely) seen or collected on rocky shores throughout the lake, with the rather startling exception of the shallow south end, Cape Maclear and the southern arms. One can only speculate as to why it is absent there, where there is ample rocky habitat and where other widely distributed Mbuna such as Labeotropheus species are found. Matt and I propose one possible answer in our paper.

This distinctive cichlid bears little resemblance to other Mbuna, with its laterally compressed head bearing somewhat enlarged lateral line pores, a somber color pattern of muted vertical bars (although breeding males become more colorful), and solitary, wandering habits. In fact, this unusual behavior — almost as though the fish is an outcast, banished from cichlid society — partly inspired our choice of the new generic name. "Abactochromis" is derived from the Latin "abactus" (ab-, away from; actus, driven), meaning driven away, banished, expelled; and the widely used root "chromis," seen in many a haplochromine generic name. A second meaning that our name alludes to is our removal of this species from its original genus; we "banished" it from Melanochromis, where it had mistakenly remained for 75 years, to its very own genus. Its phylogenetic position among the Mbuna is unknown at this time. There are some hints that it may be a basal mbuna that split off early in the history of the clade.

Ribbink et al. (1983) reported this species (then still called a Melanochromis) from shallower water than where I found it, less than 8 meters (26 feet) in depth. These authors note that "[i]t usually remains hidden among the rocks and appears to be rare. However, a rotenone sample at Maingano [Likoma Island] revealed that there are more M. labrosus among the rocks than indicated by transects and by observation." Ribbink et al. were able to observe its feeding behavior: "It moves from rock to rock placing its narrow mouth and large lips in cracks and grooves, which it seals, and then sucks the benthic Invertebrata and loose Aufwuchs from the sealed area."

Konings provides additional observations and speculation about this interesting species:

At Chitande Island I once found an orange M. labrosus, a polychromatic form of this normally brown coloured species [the photo accompanying this statement shows an individual colored a somber, dull orange and showing muted vertical bars; it is not similar to on orange morph of, say, a Labeotropheus].... M. labrosus is seen sporadically all around the lake but is found most frequently at islands and along the north-eastern shores, north of the Ruhuhu River. This distribution pattern is characteristic of an old species [I agree] with a narrowly defined specialisation.... Both sexes are dark brown, but males may have a reddish sheen overlying the brown ground colour. Another characteristic, not seen in any other mbuna, is the strongly laterally compressed body. Like the similarly compressed Altolamprologus compressiceps of Lake Tanganyika, it is thus able to penetrate into narrow slits and cracks between the rocks. The soft fleshy lips are used to seal off the crack while the prey is sucked out of its shelter. Like other laterally compressed cichlids with swollen lips (eg Lichnochromis acuticeps, Protomelas ornatus), it feeds primarily from horizontal cracks and slits inside caves. In order to penetrate such cracks it turns on its side just before entering. M. labrosus moves in and out of caves searching for small mbuna and crustaceans. Males do not defend a spawning site, but aggressive behaviour (defence of the feeding site) is displayed by both male and female when two conspecifics meet.   (Konings, 1995: 172-173)

However, Matt Arnegard and I had to disagree with Ribbink and Konings about the function of the soft, enlarged lips. We believe they may be too delicate for constant friction against rocks. Our discovery that the lips are densely packed with taste buds suggests an alternative explanation; these lips, much like the barbels of catfishes, may allow A. labrosus to sense prey items deep in dark cracks by tasting them. Or, perhaps the two proposed functions are not mutually exclusive. A well-designed experiment could settle the matter. In any case, Abactochromis labrosus is an unusual and highly intriguing cichlid.

Two photos below: The holotype of Abactochromis labrosus (BMNH 1935.6.14:321). Below the whole specimen is a closeup of the holotype's head. As may be seen by comparing the preserved holotype with the photos of even the smaller freshly collected specimen (above), the lips and their median lobes have shriveled considerably in alcohol. Black and white photos copyright © by M.K. Oliver. 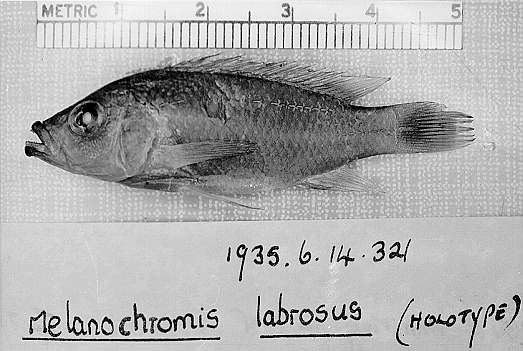 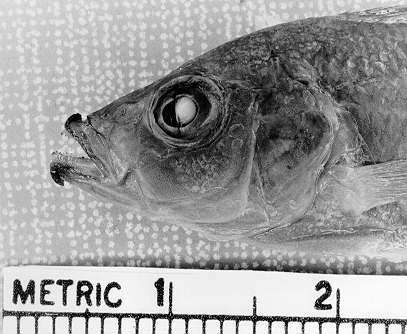