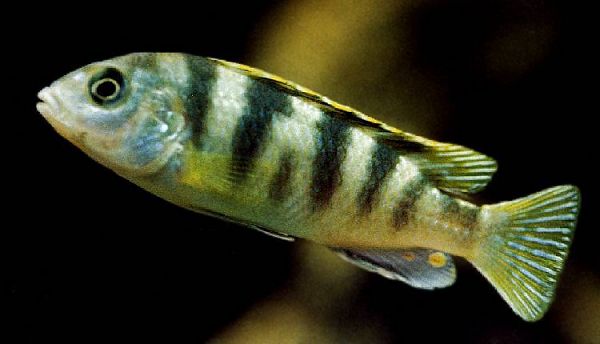 Above: Labidochromis sp. "perlmutt," a male photographed by Georg Mittenecker; photo used with his generous permission. To the best of my knowledge, this popular and colorful species of Labidochromis is still scientifically undescribed and so lacks a proper scientific name. "Perlmutt" (one word) is German for "mother-of-pearl" — the fish has nothing to do with mongrel dogs, contrary to those aquarists who think it is a "pearl mutt"! In the aquarium trade, this beautiful fish has also been called Labidochromis "yellow bar" and the "pearl of Tanzania." In the wild, it reaches a total length of 7.6-8.9 cm (3-3½ inches).

This colorful Labidochromis was discovered during or shortly before 1995 close to Mbamba Bay on the Tanzania shore of Lake Malawi, at Higga Reef. It also occurs nearby at Mbamba Bay Island, according to Konings (1995c), who also pointed out that this form somewhat resembles L. caeruleus and could eventually prove to be a geographical variant of that species. Certainly, the form of the head, with a somewhat pointed snout, is similar in the two. L. sp. "perlmutt" inhabits rocky shores at rather greater depths than most of its congeners; 12 meters (39 feet) is the minimum depth at which it has been observed, and this seemingly very rare species appears to live primarily below 30 meters (100 feet) (Konings, 1995c).

Scheel (1996) described the live coloration in the following terms:

In the aquarium, Labidochromis sp. "perlmutt" is a relatively peaceable species and is suitable for beginners with Malawi cichlids. It is said to be an insectivore, so unlike most Mbuna it can tolerate more meaty foods (live or frozen Daphnia, bloodworms, brine shrimp) in addition to good flake foods containing Sprirulina. Breeding is similar to other Mbuna. Females reportedly produce around 13-15 fry, which they brood in the mouth. The fry are vertically barred; the mother-of-pearl luster develops at a length of ½ inch (13 mm) and males start to lose their bars at ¾ inch (19 mm) (Scheel, 1996). If well-fed and given the required frequent water changes, the young can reach a length of 2 inches (5 cm) in as little as three months, at which size they are already approaching sexual maturity.