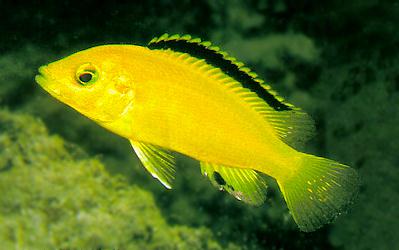 Above, yellow fish: The immensely popular "yellow" or "electric yellow" form of what is presumed to be Labidochromis caeruleus, photographed by Ad Konings at Mbowe Island (between Ruarwe and Usisya), Malawi. Above, three fish: Konings identifies all three of the fishes in these photos as L. caeruleus; left: an all-white individual with no evident black markings, at Cape Kaiser, Tanzania; center, a blue male with prominent black bars, at Lundo Island, Tanzania; right, a whitish individual with black-striped dorsal fin at Londo, Mozambique. All four photos are by Ad Konings, reproduced with his generous permission from his superb 1995c book. For more about the coloration of Labidochromis caeruleus, read on....

Below: A specimen of Labidochromis caeruleus (sex, length, and museum register number unreported), from Nkhata Bay, Malawi. Reproduced from Fig. 20 of Lewis, 1982. Lewis reported that he found this species only at Nkhata Bay (which is also the type locality from which Fryer originally described it). Lewis commented on the life coloration as follows:

"Fryer (1956) described the colour of both sexes of L. caeruleus as 'a startling light cobalt blue, approaching white in one specimen'. However, all the individuals examined in the present study, and all those seen in the field, have been pure white, occasionally with faint blue iridescence. A. J. Ribbink (pers. commn) has observed courtship in L. caeruleus and noted that courting males but not females had a faint blue flush. It would appear that the normal colour of L. caeruleus is white and that a pale blue cast is developed only by breeding males.

The Labidochromis "electric yellow" at the top of this page that is currently so popular in the aquarium trade was completely unknown to Lewis (and Fryer), and one wonders if it is a locally occurring xanthic color variant of L. caeruleus or possibly a distinct species. In the absence of evidence to the contrary, perhaps from molecular genetics, it is convenient for the present to consider all of the color forms pictured above as belonging to L. caeruleus.