Above: The large predator Nimbochromis fuscotaeniatus, photographed by Ad Konings at Kande Island, Malawi; used with his kind permission. Although Eccles & Trewavas (1989) classified this species in their genus Nimbochromis along with "blotched" species such as N. polystigma, N. livingstonii, and N. venustus, a cladistic analysis by Oliver (1984) — which Eccles and Trewavas cited — had cast considerable doubt on the idea that fuscotaeniatus is related to that group because the color pattern of this species appears derived from horizontal stripes rather than vertical bars as in Nimbochromis. Oliver suspects that Konings (1995: 237) will prove to be correct in suggesting that N. fuscotaeniatus belongs in the genus Tyrannochromis with such species as T. polyodon. That relationship would also explain why N. fuscotaeniatus has never been observed to lie on its side as other Nimbochromis species do (Konings, 1995). Below: A drawing of the holotype of N. fuscotaeniatus (BMNH 1921.9.6:129), from Regan (1922: fig. 12). 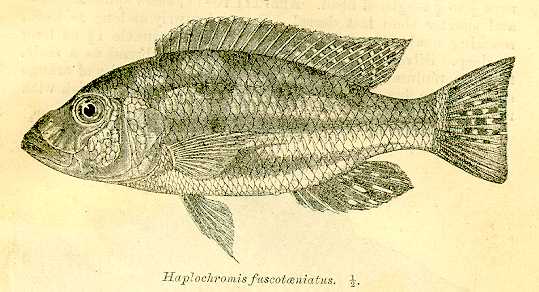