round the late 1960s, a group of cichlid fanciers in the greater Los Angeles area began getting together under the slightly pretentious name of the Advanced Cichlid Aquarists of Southern California (ACASC). I attended a meeting in — I think — late 1970 or early 1971, at which the guest speaker was a genial visiting Englishman, Bob Heath. Bob was a fancier of African cichlids, but he had a slight advantage over most of us when it came to obtaining new and interesting species: He was a flight engineer for BOAC (as British Airways used to be called). Furthermore, he often flew the London-to-Entebbe (Uganda) route! Imagine being able to visit Lake Victoria regularly, collect your own fishes, and ship them home with you on your jetliner! What's more, Bob had the ear of Dr. P. Humphry Greenwood in the British Museum — the authority on the taxonomy of Ugandan cichlids, who often identified Bob's fish for him. Oh yes; Bob Heath was a very interesting speaker indeed.

At the meeting, which I seem to recall was held somewhere along the Pacific Coast Highway, I set up my camera on a tripod and prevailed on everyone to pose for a group picture. Now fast-forward about 35 years. In an old box, I found a somewhat damaged black-and-white print I had made of the group picture. Unfortunately, there was no record of the names of those in the picture. I only remembered a few of them. The print sat in a corner for several more years. I looked for ACASC on the Web, with no success (is the group defunct?), and puzzled over the cichlidophiles in the photo every so often. Then, recently, I stumbled on the Rosetta stone — the folded piece of paper on which all of the names were written at the meeting. How it got separated from the print, I don't know. But I knew at once what it was!

o now, without further ado, I can present a small piece of West Coast cichlid club history. Roll the mouse over the photo to reveal the names. (More text below photo) 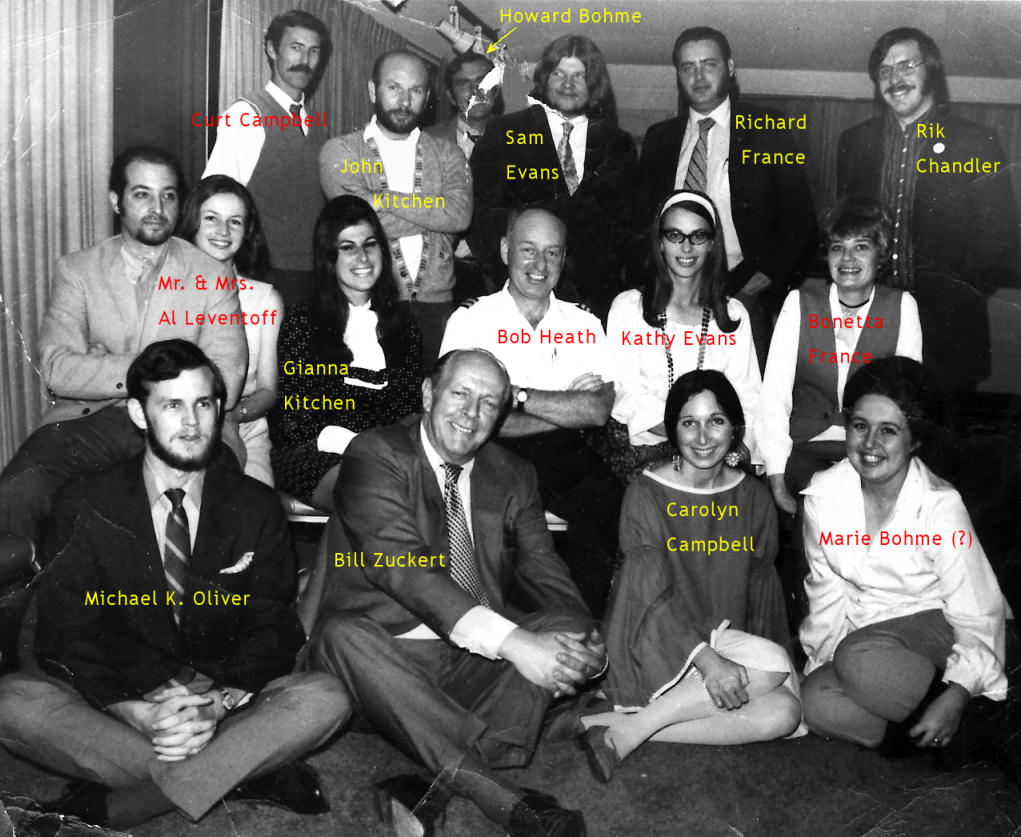 he Campbells were friends of mine. I often visited Curt and Carolyn in Manhattan Beach, I think it was; Curt was especially fond of Tanganyika cichlids. Another person of note in the photo is the late Bill Zuckert, an avid general aquarist who (like me) was active in the Los Angeles Aquarium Society. Bill was an actor in the movies and television, his career spanning 50 years.

If anyone can give the date of the meeting more precisely, or has any corrections to the names — or was at the meeting and is in the photo! — I'd love to hear from you.