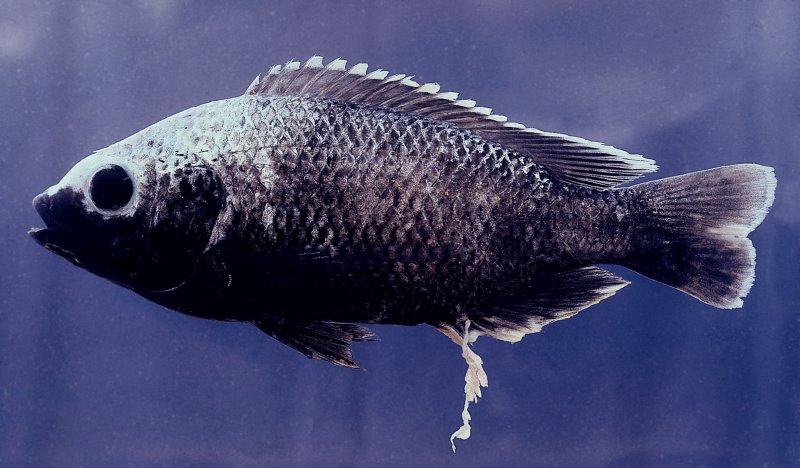 This is one of the three "Chambo" species endemic to Lake Malawi. The three species are believed to be more closely related to each other than to any other tilapia species (Sodsuk et al. 1995), and have probably evolved within the lake. In addition to "Chambo," other African common names applied to one or another sex or life history stage include Lisanga, Chinganga, Nchisichesi, Ngwalu, Zeya, and Kasawala. (You might like to compare a similar Chambo with the haplochromine predator of the Chambos, the aggressive mimic Corematodus shiranus, to see the amazingly similar coloration the latter has evolved.)

Like other species of the subgenus Nyasalapia, males of O. (N.) squamipinnis develop long branched genital "tassels" that serve as egg dummies. These are extensions of the male's genital papilla. This is shown clearly in the picture of a territorial male (above, shown enlarged in the inset at right), taken by Denis Tweddle near Karonga. The genital tassels may be exceptionally long in O. squamipinnis. One 17 cm (6.7 inch) SL male, which held a territory but did not spawn, was reported to have a pair of tassels as long as 9 cm or 3½ inches (Trewavas, 1983: 477).

Mature males of O. squamipinnis are easily distinguished from the other chambo, because they have pale heads. Usually the head is blue, but sometimes it can be green or white, as shown in the photograph below of specimens collected at Lake Chiwondo, near Karonga. (Continued after photo)

In Lake Malombe, this species is often very deep-bodied and mature males tend to be pale (as in photo below). Specimens from Lake Malombe and the southern part of the south-eastern arm of Lake Malawi also have very slender pharyngeal bones, while those from Karonga have stout pharyngeal bones with a large toothed area. A very similar trend in morphology is shown by the closely related Oreochromis karongae. (Continued after next photo)

Immature fish and females are hard to tell apart from those of O. karongae. In the photo below taken at Cape Maclear, of immatures about 25 cm (10 inches) total length, the upper fish is O. squamipinnis, the middle one O. karongae, and the lower one O. lidole. The O. squamipinnis is deeper-bodied and more silvery-grey. In other parts of the lake they can be harder to tell apart. (Continued below)

The breeding season runs from October to March, peaking from December to February, according to the observations of one of us (GFT). Like other Oreochromis, they are maternal mouthbrooders. Males dig large spawning pits in the sand at depths of 2-20 meters (6-65 feet).

Additional observations on the breeding behavior of O. squamipinnis were reported by Trewavas (1983: 476-7):

"The main breeding season is the rainy one, December to April.... [A]t least in the northern part of the lake there may be a second breeding season for this or O. saka. The spawning areas are in deeper water than those of O. saka, the evidence pointing to depths of 16 m to 20 m.... Mating behaviour has been observed in the aquarium by Berns et al. The male digs a simple circular pit and defends it. He makes forays towards a group of schooling females swimming at the surface, but the female who comes down to the nest usually appears to do so on her own initiative. She enganges in some sand-digging at the centre of the territory and the mating behaviour then includes the T-stand, with the nose of one fish at the genital papilla of the other, both partners alternately forming the horizontal part of the T. The eggs are laid in batches and immediately picked up by the female as the male glides over them to fertilize. The branches of his genital papilla may pass through her mouth and the water is then doubtless full of sperm, so that the eggs are fertilized in the mouth as well as on the ground."

The chambo are the most valuable food fishes in Malawi. According to Jackson (1961: 559), over 3000 tonnes of Chambo per year (chiefly O. squamipinnis) were being taken from L. Malawi's southeast arm alone during the 1950s. The peak yield for chambo increased to an estimated 21,000 tonnes in 1983, mostly from the SE Arm and Lake Malombe (Turner, 1995). Unfortunately, however, populations collapsed in the 1990s as a result of overfishing.