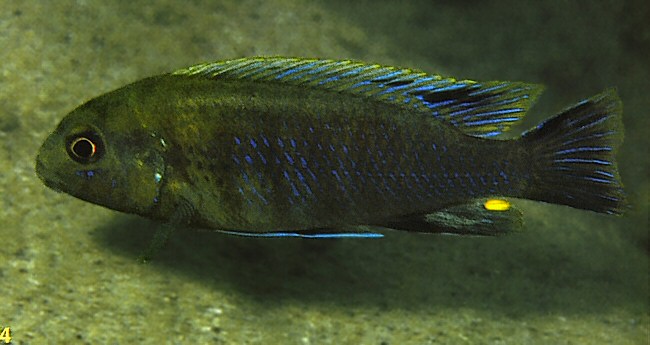 Pseudotropheus lucerna (Trewavas, 1935) is one of a group of about 8 (Konings, 1995c) similar, poorly known species, the others of which all remain undescribed. All share a terminal to slightly subterminal mouth (lower jaw often a little shorter than upper), usually have an irregular black spot on the soft rays of the dorsal fin, and live in the intermediate rock/sand zone in shallow water, rarely deeper than 5 meters or 16 feet. Konings proposed sorting these species into two subgroups, the "Lucerna Blue" and "Lucerna Brown" groups; he assigned P. lucerna itself to the "Lucerna Brown" group. This terminology is confusing, in that one of the forms in the latter group was itself already called Pseudotropheus lucerna "brown" by Ribbink et al. (1983: 194).

Pseudotropheus lucerna feeds on the algal community on rocks, sand, and plants (Ribbink et al., 1983), in water no deeper than 7 m (22 feet). Loose Aufwuchs and filamentous algae were the chief stomach contents found by Fryer (1959a). The jaws and their teeth are shown in the photo below. (Text continues below photo)

Males have been observed defending their territories aggressively against members of their own species, but reacting less strongly to individuals of other species. Nests are dug beside rocks or sometimes among Vallisneria leaves. Females, which are not territorial, tend to congregate in groups of up to 10 Ribbink et al. (1983).

This species is among the larger Mbuna. The largest known specimen may be one of the syntypes (illustrated below), which Trewavas (1935) measured at 135 mm (5.3 inches) total length. They are probably capable of growing larger in the aquarium, as with other Mbuna species, but P. lucerna has rarely if ever been exported to the aquarium trade.

The coloration of P. lucerna is summarized by Ribbink and colleagues as follows: "Males are brown and purple with a prominent dorsal fin-spot and orange pelvics; females are silvery grey." These authors also document the coloration of this little-known species in more detail:

The P. lucerna assemblage as a whole is widely distributed in the lake, but the form identified as the true P. lucerna has evidently been confirmed only at (from north to south) the type locality of Deep Bay (now called Chilumba), Ruarwe, Usisya, Lion's Cove, Nkhata Bay, and Bandawe (Ribbink et al., 1983, Table 32). These localities are all in the northern half of the lake, on the western shore. FishBase also records specimens attributed to this species from the additional localities "just north of Messule Point" [Mozambique], Likoma Island, and Mbenji Island. The latter record, if correct, would place the species in the southern quarter of the lake. Some additional southern records, also listed in FishBase, are suspect because the identifications (including those by me) were made before the publication of Ribbink et al. (1983) demonstrated the existence of additional forms similar to, but distinct from, P. lucerna, such as P. lucerna "brown."