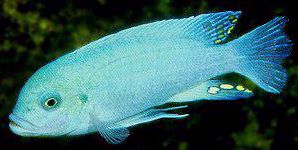 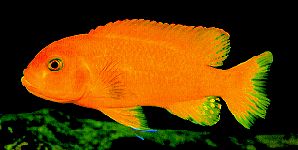 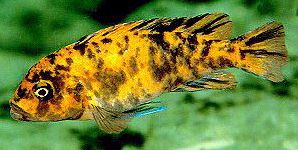 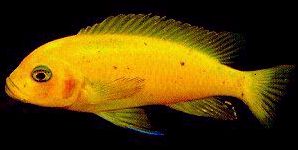 All four fish are Maylandia estherae, the "red zebra." The blue fish is a typical male photographed at Minos Reef, type locality of the species, near Meluluca, Mozambique (about 15 km south of Metangula). Note the absence of distinct black bars on the body, and the presence of yellow spots in the soft part of the dorsal fin (these spots are absent in males from populations north of Minos Reef). Similar plain blue, unbarred males are also characteristic of M. benetos and M. callainos. The other three fish shown above are all females. The heavily spotted OB individual and the deep orange fish were both photographed at Minos Reef; the yellow female was filmed at Chilucha Reef at Metangula. The "red zebras," originally regarded as morphs of Pseudotropheus (now Maylandia) zebra, were first exported to the aquarium trade in the early 1970's but only named as a distinct species in 1995. Konings named this beautiful fish for Esther Grant, wife of Stuart Grant, the Malawi fish exporter. Photos by Ad Konings, reproduced with his generous permission from Konings (1995c).