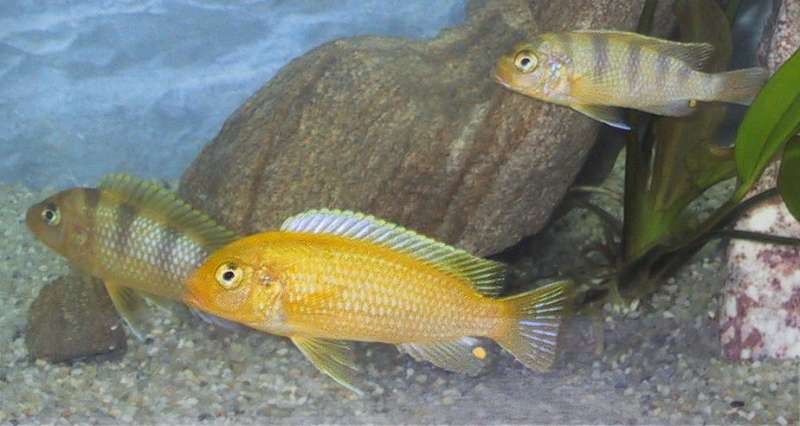 The mbuna properly called Maylandia lombardoi (also seen as Pseudotropheus lombardoi and Metriaclima lombardoi) is one of the most popular and widely available rocky shore Malawi cichlids, at least in the USA. Nevertheless, it is not a fish for the novice cichlid-keeper, for it is highly aggressive, like most members of the Maylandia zebra complex. In the lake, it is found at Mbenji Island and Nkhomo Reef, in intermediate rocky—sandy and sediment-rich areas, and is most abundant at a depth of around 10 meters or 33 feet (Konings, 1995c: 119). This group of a yellow male (foreground) with two females in an aquarium was photographed by Akio Kaesermann of Switzerland, who very kindly made his photo available for display here.

Adult female M. lombardoi are easy to distinguish from males, because they are colored in shades of purple instead of yellow. An example of the typical appearance of males and females is shown on Wikipedia. However, when mouthbrooding, females may defend a small territory and assume the coloration of males (Konings, 1995c: 12). (Akio notes that the females in the above photo had only recently been introduced to the aquarium, and had not yet settled down enough to show their characteristic purple coloration.) This is thought to be the only Malawi cichlid with blue females and yellow males, although Maylandia barlowi is a related species with similar yellow ("golden") males.

As one of the more readily available Mbuna species, Maylandia lombardoi has been the subject of a number of research studies of cichlid behavior. Unlike many of its relatives, M. lombardoi males typically have only a single, relatively large eggspot on the anal fin. Recently, Vanessa Couldridge (2002) published evidence that females of M. lombardoi prefer males with this single spot to experimentally manipulated males with two spots, and also prefer males with the natural size of spot to males with a single, but smaller, eggspot. This evidence suggests that M. lombardoi females may use the single large eggspot to help recognize males of their species, and that the females' preference may have driven the evolution of the single spot.

In other research, the behavior of males of this species in response to visual and olfactory cues from females has been studied by Venesky and colleagues (2005). Andries and Nelissen (1990) studied the dominance hierarchy in this and other Mbuna species. Naish and Ribbink (1990) investigated the possibility that adult individuals of this species can change sex, but did not find strong evidence of it; instead, they found that females are dimorphic, some showing female, others male, coloration.

Maylandia lombardoi is frequently sold in the USA as the "kenyi" or "kennyi," or as the Golden Zebra. It has also been sold in Europe as "Pseudotropheus lilancinius" or "liliancinus." All of these names are without scientific validity.