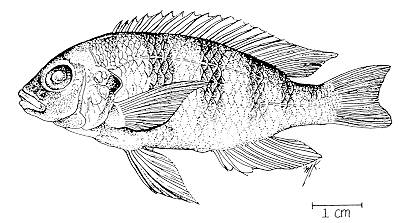 The holotype of Maylandia pura (USNM 307339, an adult male 60.6 mm SL from Kanchedza Island); drawn by M. Katz. Like Maylandia crabro, this is another facultative cleaner fish that is also probably related to M. livingstonii and M. lanisticola. According to Stauffer (1991), M. pura feeds on periphyton (algal growth on plant leaves), but has also been observed to remove ectoparasites from Lethrinops cf. lituris, Protomelas fenestratus, and Ctenopharynx cf. pictus. Drawing from Fig. 1 of Stauffer (1991).

The species was originally described as Pseudotropheus pursus by Stauffer (1991). Over 20 years later, Stauffer, Black, & Konings (2013) determined that the original spelling had been incorrect, and corrected it to purus (from the Latin for "pure"). When correctly classified in the genus Maylandia (which has a feminine gender), the spelling of the species name, an adjective, has to change to pura to agree in gender with its genus.

Konings (1995c) argues that M. pura is a junior synonym of M. livingstonii:

"The population [of M. livingstonii] at Kanchedza Island (south of Monkey Bay) was described as Ps. pursus by Stauffer (1991). Some individuals of this population are found in the intermediate habitat where they sometimes feed on parasites found on the fins of other cichlids (Stauffer, 1991). This population is, however, an intermediate between the small shell-dwelling species found in deeper water north of Monkey Bay and the group-forming, larger specimens common south of Crocodile Rock, so in my opinion there is no reason to single it out as a separate species. The change from the small shell-dwelling forms to the large group-forming populations is gradual. Stauffer (1991) mentions that Ps. pursus is not associated with empty Lanistes shells, but at deeper levels at Mazinzi Reef I have seen sub-adult specimens using such shells as shelter. For these reasons I regard Ps. pursus as a junior synonym of Ps. livingstonii." (Konings, 1995c: 244)