The superb photograph above, which David James Goddard took in Lake Malawi (locality unspecified) and very kindly allowed me to use here, shows a male Maylandia aurora. This beautiful species was described and named by Warren Burgess (1976) based on aquarium specimens thought to have been collected at Likoma Island. Initially this species was described in the genus Pseudotropheus. However, as it is thought to be related to the fish now correctly called Maylandia zebra, it is currently classified as Maylandia aurora (FishBase). A few writers place it in the genus Metriaclima but that name is a junior synonym of Maylandia and should not be used (Catalog of Fishes). 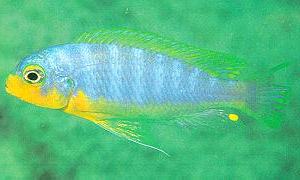 Studies of mbuna habitat partitioning and of female choice of males based on eggspots have been published by Hert (1990, 1991) utilizing Maylandia aurora.