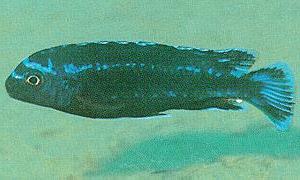 Like all Melanochromis species, M. johannii has horizontally striped males and females of different colors. Males are a variable bluish black with pale blue or royal blue stripes. The dramatically different females are orange or yellow-orange with indistinct blackish stripes (see photos at Malawi Cichlid Homepage).

M. johannii is currently one of the more widely available mbuna species, at least in the USA. Unfortunately, like most members of the genus Melanochromis, this one has aggressive, territorial males which require a large aquarium with plenty of rockwork or other hiding places. If not provided with such quarters, the dominant male may pursue and kill any subdominant males and perhaps females that are not ready to spawn. Thus, this is emphatically not a fish for the novice cichlid keeper, even though it is beautiful and widely available. (However, the Malawi Cichlid Homepage writers, at the link in the preceding paragraph, found this species to be one of the less aggressive species of the genus.)

The drawing below shows the holotype specimen of M. johannii, a mature female 84.3 mm total length [70 mm standard length (without tail)]. This drawing, by D.H. Eccles, is reproduced from fig. 2a of the original description (Eccles, 1973). The species was initially described in the genus Pseudotropheus. It was named "johannii" to commemorate one John James, who had been a catcher of aquarium fishes in Lake Malawi; note the correct spelling of the name, with two n's and two i's. The type locality is Cape Ngombo on the southeast shore of the lake, "in an area of scattered reefs."