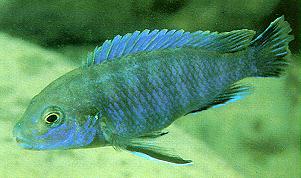 The attractive Labidochromis above is L. ianthinus, a male photographed underwater at Mbenji Island, Malawi (the type locality) by Ad Konings; photo used with his kind permission. Konings (1995c: 168) reports finding this species also at Nkhomo Reef, and notes: "It is an insectivore, and males, as in most insectivorous mbuna, are not territorial. Male and female have almost the same coloration; males have a mauve sheen on the body and on the cheeks."