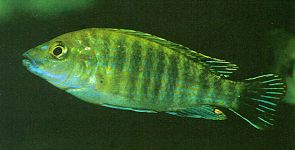 Above: A male Labidochromis shiranus from Nkopola, Malawi, in the southeast arm of the lake, as photographed by Ad Konings; photo used with his kind permission. This species can be recognized by its long, rather pointed snout, together with its coloration.

Below: L. shiranus, dentition. This drawing, from Trewavas (1935), is of a paralectotype (BMNH 1935.6.14:335) of L. vellicans that Lewis (1982) "believed to belong to this species [L. shiranus]." Lewis did not, however, include this specimen among the type specimens of his new species (the specimen was not available for him to examine at the time Lewis was preparing his revision of Labidochromis). 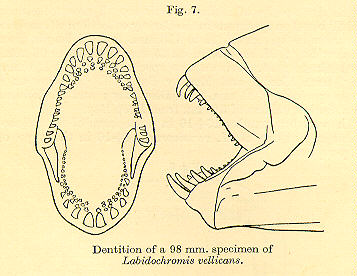