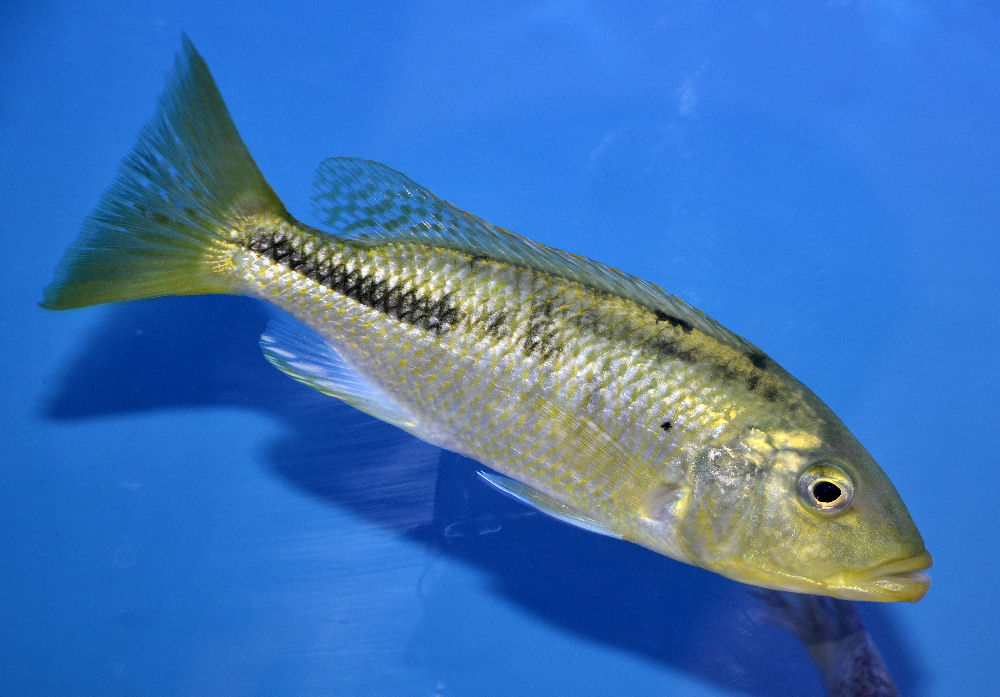 Above: A Lake Malawi "hap", adult and apparently male but not in breeding condition, in an aquarium shop. Its identity is uncertain, as discussed below. Photo courtesy of Warren Van Varick, Sea Level Aquarium, Pine Brook, New Jersey.

The shop owners asked my opinion of its identity. I didn't recognize the species, and was unsure even about its genus. As they suggested, it does resemble a Buccochromis in its predator's mouth and somewhat in its black color pattern, which approximates the curved oblique stripe seen in B. heterotaenia but with the anterior half of the stripe faded. But, to me, its color pattern is better in line (no pun intended) with that of the genus Hemitaeniochromis, as in the type species H. urotaenia. I recently described a second species of Hemitaeniochromis, H. brachyrhynchus (Oliver, 2012). But, the mystery hap clearly isn't either of these species.

Konings (2007) has photographically documented several still-undescribed species that may be referable to Hemitaeniochromis. This isn't one of them.

After poring over photos and drawings in all my relevant sources, racking my brain, and even crowd-sourcing the identification on my Facebook page, I still favor two possibilities that occurred to me when I first saw this "mystery hap."

Given that it was probably acquired from a cichlid breeder wholesaler, possibility #2 appears much more likely.