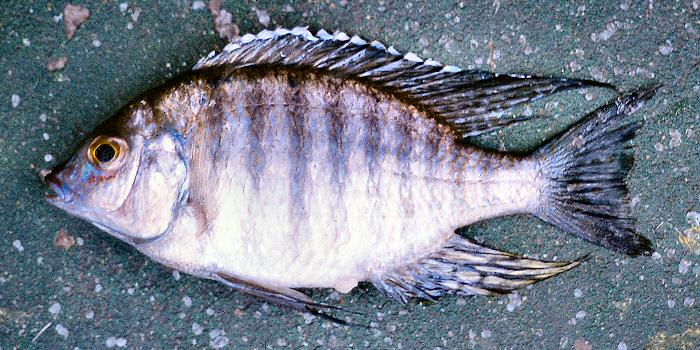 This is one of the bigger deep-bodied barred Lethrinops species from the deep-water mud-bottom habitats of Lake Malawi. This is another species that has suffered badly from heavy trawl fishing in the area where it was most abundant. The species is generally found between 20 and 50 m (65-165 feet) depth.

It has been reported from the SE and SW Arms, Domira Bay, and Bandawe in the north. The northern areas may provide a refuge for the species in the event that it is driven to extinction in the south. [Update: L. stridei is "almost certainly extinct for several decades now" (Denis Tweddle, personal communication to M.K. Oliver, 26 Oct 2015).]

It has fewer lower gillrakers (19-23) than Lethrinops microdon, but more than most other similar species. It has 9 dark bars below the dorsal fin and lacks a midlateral spot. It generally has a larger mental (chin) process than the similar, but smaller, Lethrinops 'oliveri'.

Individuals of the species reach a maximum size of around 16 cm (6.3 inches) total length. It feeds mainly on calanoid copepods, along with benthic diatoms, principally the filamentous Aulacoseira.