This species is probably the most common cichlid in Lake Malawi. Acoustic surveys put the total biomass at around 87,000 tonnes in the pelagic zone. Assuming an average adult weight of 60g (2 ounces), this is approximately 1,450,000,000 fish, plus juveniles. Surprisingly, for such a common fish, it was only formally described in 1994 (Turner 1994b). It lives in the open waters from the surface right down to at least 220m (approx. 700 feet). It mainly feeds on copepods. It grows to about 19cm (7½ inches) total length. Females only lay about 15 eggs. Breeding males develop dark flanks and bright yellow "blaze," like many utaka. It has never been kept in captivity and indeed may never have been seen by SCUBA divers. The photo shows a male beginning to develop breeding dress, trawled from the SE Arm of Lake Malawi.

Addendum by M.K. Oliver (May 2008): This species has now been exported, at least once to Denmark, where it was present by December 2005. Oliver Lucanus of BelowWater.com generously shared the photo below, which he took at Carsten Gissel's place. So far as I know, this was the first time that any species of Diplotaxodon had ever been sent out of Lake Malawi.

Professor George Turner, who described this species in 1994, examined the photograph and provided the following very interesting details (in litt. 11-Apr-2007): "I think this photo is probably D. limnothrissa. Males should eventually develop a white/yellow forehead 'blaze' like Copadichromis virginalis. I have around 12 of them in the aquarium, just reaching sexual maturity. Even the small fry are found offshore, but I had the idea that we could collect young from the mouths of brooding females caught on trawlers. Martin Genner tried this out about 2 years ago, and although we lost the first couple of batches of fry, the 3rd one has survived well. There was a Danish guy at Stuart Grant's place at the time when Martin [went] for his first batch and I think he took some too. This might be the source of the fish." 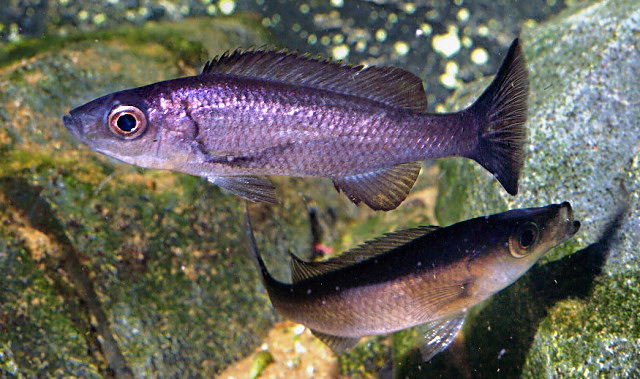