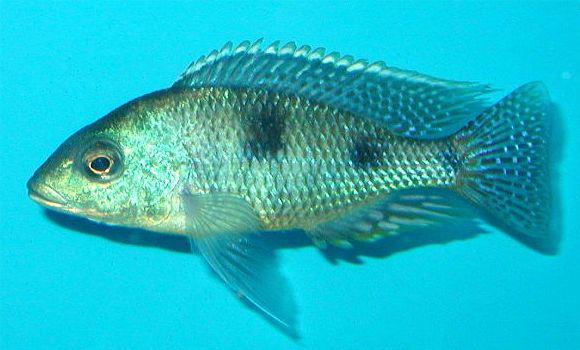 Above: Tramitichromis intermedius is a little-known species that was originally described under the name of Lethrinops intermedius by Trewavas in 1935. As recently as 1989, Eccles & Trewavas stated that the coloration of living individuals was not recorded. This deficiency is set right with the above color photograph of a captive adult male, taken by Spencer Jack of the Canadian Cichlid Association. Spencer generously made it available for display here. There is another color photo, by Ad Konings, at the bottom of this page.

Konings (1995) published the first real observations of the biology of Tramitichromis intermedius known to me. He noted that it is:

...a smaller species [than Trematocranus microstoma] — maximum total length approximately 14 cm [5½ inches].... [T]he lower jaw of T. intermedius has large sensory pores, much larger than in any [other] Tramitichromis species. This feature, and in particular its pigmentation pattern, correspond more with the definition of the genus Trematocranus. T. intermedius is normally found singly or in small groups foraging over sediment-covered sand in shallow water. It feeds on insect larvae and other soft invertebrates. T. intermedius has a lake-wide distribution. Breeding males defend small pits in the mud or sand as territory. — Konings (1995c: 277-278)

Eccles & Trewavas (1989) transferred this species to their — in my opinion — dubious new genus Tramitichromis, with five species — every one of which has a different melanic color pattern! Their basis for grouping these diverse fishes into a genus of their own was what these authors regarded as an unusually shaped lower pharyngeal bone, which has a more or less steeply angled anterior blade, and, in some of the species (but not T. intermedius), a broadened anterior tooth-bearing surface. [Compare the pharyngeal bone of T. intermedius (left) with the bones of T. variabilis and T. brevis as seen on my T. variabilis page.]

The color pattern of Tramitichromis intermedius (preserved fishes; similar in living ones) is described by Eccles & Trewavas (1989) as "Similar to Trematocranus placodon, with supra-pectoral and supraanal spots, but the supra-pectoral not reaching dorsal base, although supraanal does." In fact, however, right above that statement, they reproduce a drawing of the lectotype by Myrtle Fasken which clearly shows that the suprapectoral spot (the large dark spot above the middle of the pectoral fin) does reach the base of the dorsal fin. This may also be seen clearly in Spencer Jack's photo (above).

Why am I making such a point of this detail? Because suprapectoral and supra-anal spots that, in adults, "fill in" above to form "saddles" extending to the dorsal fin base are unique to just five species, currently classified in three different genera: Hemitilapia oxyrhynchus, Trematocranus placodon, Trematocranus labifer, Trematocranus microstoma, and our friend Tramitichromis intermedius. I hypothesize that spots of this configuration are a synapomorphy (shared derived character) showing that these five species shared a common ancestor unique to them. In fact, I would happily consider them all to be species of Hemitilapia (the oldest generic name of the three).

Admittedly, the pharyngeal characters noted above have a different, conflicting distribution among species than does my spot character. However, the pharyngeal character states vary considerably in the species assigned to Tramitichromis, and are likely adaptive features connected with feeding. I hypothesize that the pharyngeal resemblances are due to convergence (chance). The specific coloration character I described is, I suspect, not adaptive, and is indicative of phylogeny. These competing hypotheses are amenable to testing by examination of the distribution of additional characters (such as squamation or gene sequence characters) that may be discovered.