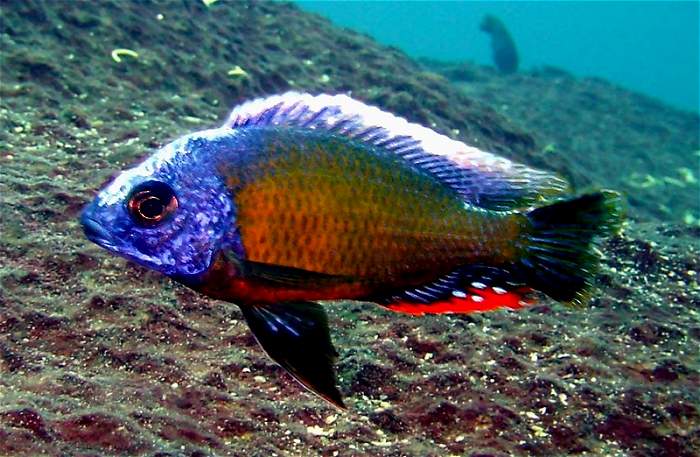 Above: This is what a territorial male Protomelas sp. "steveni taiwan" looks like on its native reef. (Photo copyright © by Larry Johnson of Mt. Hope, Ontario, Canada.) Larry captured this stunning view with a digital camera in about 10 m (33 feet) of water on Taiwan Reef in central Lake Malawi. This remote rocky reef is located about 30 km (19 mi) west of the village of Lumbaulo on the Mozambique (eastern) shore and about half that distance north of Chizumulu (Chisumulu) Island.

Larry Johnson provided the following notes on his visit to Taiwan Reef (during a visit to Malawi in September and October, 2001):

The water was crystal clear. On each rock, measuring about 30 feet in diameter, there would be approximately 3-4 dominant males, mostly staying on the outer limits of the rock. If one traveled towards the centre one of the others would meet to challenge it. With all the rocks at this location the fish are by no means rare.  — (in litt. 21 Mar 2002)

Ad Konings has the following observations about this species and some of its presumed relatives:

...Protomelas sp. "steveni taiwan" ... is restricted to three isolated areas. The name is derived from Taiwan Reef, a rocky reef ... where the species was first discovered. Interestingly almost identical populations, thought to be the same species, are found in Tanzania at Higga Reef and Mbamba Bay Island and are known as »Chimoto Red« and »Chimoto Yellow« respectively. Territorial males of the »Steveni Taiwan« defend territories on top of rocks at rather deep levels — most males are found at a depth of more than 20 metres [65 ft]. In contrast to the Steveni Imperial, which is sympatric with other »Stevenis«, P. sp. "steveni taiwan" is the only Steveni found in its area of distribution.  — Konings (1995c: 134-135)

In the aquarium, Protomelas sp. "steveni taiwan" would be happiest if given 100 gallons (380 L) or more in which to roam — as usual, the bigger the aquarium, the better. Also as usual, strive for a single male and at least 3 females.