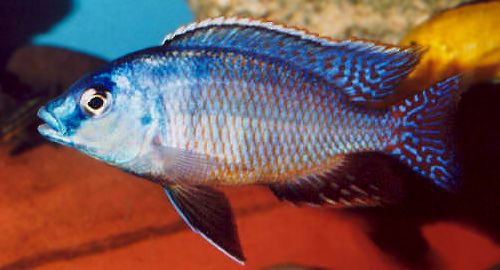 An F1 male (upper fish above) and female (lower fish above) Protomelas of the popular strain known in the aquarium trade as the "Red Empress." This is currently considered to be a form of Protomelas taeniolatus. These two photos are by Andy Fox of Cichlid City, a site in the UK. Thanks to Andy for generously offering his photos for use here.

A dark horizontal stripe along the midline of the body and a narrower one below the dorsal fin are faintly visible in the male shown here, and clearly so in the female, along with several narrow vertical bars. This pattern of black markings, found with slight variation in all species assigned to the ill-defined genus Protomelas, is hypothesized to be similar to the primitive color pattern of all endemic Lake Malawi cichlids, both "Haps" and Mbuna (Protomelas is Greek for "first black"). It is essentially the same color pattern found in numerous riverine haplochromines, and in haps of the other Rift Lakes.

A similar cichlid (perhaps an undescribed species related to P. taeniolatus) has been sold in the aquarium trade under the name "Protomelas taeniolatus Ndiwe" or "Haplochromis ndiwe" or "ndewi," or "fire blue." There are photographs of this creature at MalawiMayhem.

A very different cichlid, apparently from Lake Victoria, is also occasionally sold as the "Red Empress."

Below: A male of a different strain of "red empress" with redder fins is shown in this photograph by Vincent Guarno, from his Adams Aquatics site; photo used with his kind permission. 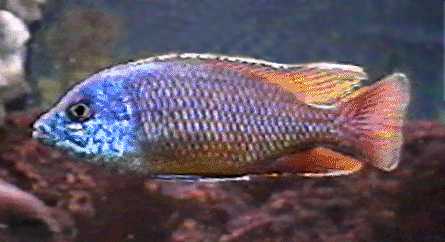