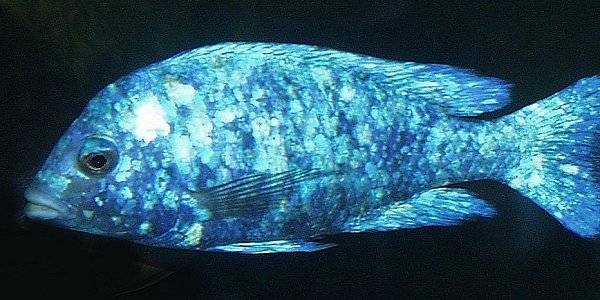 This strikingly colored Lake Malawi cichlid, most probably a member of the genus Placidochromis, is a male about three years old. It was photographed by Mr. Anton Cass of Chesterfield, England, who generously permitted this provocative photo to be used here.

This photo was taken in a large aquarium in Holland who are selling these fishes as juveniles. Every one seen has been a dark blue at an early age and these silvery blotches appear with age. I have purchased some of the animals and found that mine as they grew up all became an intense blue at an early age. They resembled the picture shown in the book Fishes of the Tanzanian Coast of Lake Malawi by Andreas Spreinat. He shows a picture, two in fact, as Placidochromis sp phenochilus. One shot appears to be in the lake, the other in someone's hand. That blue, especially the colour shown in the hand held one, is the colour the fishes went at about 6 cm. As they became older, after 12-18 months, the silver blotches started to appear. Interestingly, all my specimens went this colour indicating they were all males.

A friend has some of the same fish but his are all plain silver brown (typical Placidochromis female colours).... I have been told (but to say the least I am skeptical) that there is one type with blue females and one with brown. As I say, I do not subscribe to this and think it is just sales talk.... What is of interest is that no reference is made to large individuals showing this form of colour in the wild.

At face value, Mr. Cass's observations suggest that this distinctive, silver-blotched phenotype is a mutation (perhaps sex-linked) that appeared in a captive breeding population of a Placidochromis species, most likely P. phenochilus. (Compare Ad Konings's underwater photo of undoubted P. phenochilus at The Cichlid Room Companion.) It is possible that this silver-blotched phenotype may occur in Lake Malawi as well, but I am not aware that this has ever been documented. Alternatively, in the absence of definite information about the provenance of the photographed specimen, it is conceivable that it represents a distinct, still-undescribed species.

Reports of similar color forms with silvery patches in cichlids are rare.