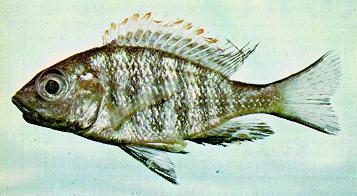 The holotype of Placidochromis hennydaviesae, a fish of unreported sex but apparently male (65.7 mm SL; USNM 210698), trawled off Monkey Bay, Malawi in 43 fathoms. Photo by Dr. Herbert R. Axelrod, from Fig. 5 of Burgess & Axelrod (1973); reproduced with the permission of T.F.H. Publications, Inc. Initially, this small species was placed in the genus Haplochromis. The original description (op. cit., p. 91) twice states that this holotype specimen has sixteen ("XVI") spines in the dorsal fin, but then says: "The XIV dorsal fin spines of H. hennydaviesae help to distinguish it from many other species of Haplochromis in which the normal dorsal fin spine count is XV or more" (p. 92). I have examined this specimen and can report that it has fourteen dorsal fin spines.