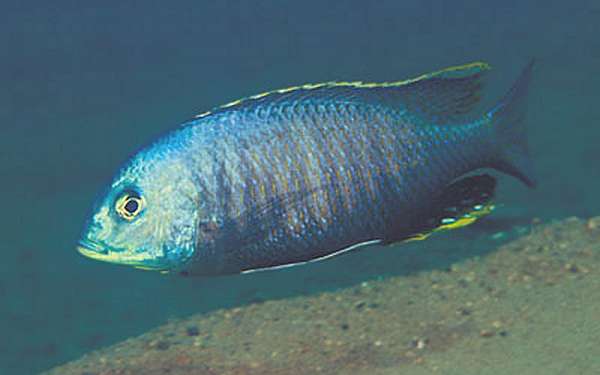 Above: Otopharynx auromarginatus is a moderately large member of the sandy shore community of Lake Malawi. The largest specimen I have measured, and largest known specimen, is 208 mm (8.2 inches) in standard length (without caudal fin) and 246 mm (9.7 inches) in total length. This male was photographed at Selewa, Malawi by Ad Konings; the photo is used here with his kind permission. Like all members of the genus Otopharynx, individuals of this species have three lateral spots, although they are obscured in breeding males such as this one.

According to FishBase, O. auromarginatus is "[c]ommon at 10 m depth and prefers the area where non-breeding individuals congregate into schools over the sandy part of the biotope. Feeds on phytoplankton or takes its food from the somewhat muddy layer on the substrate." The species is not common, in my experience, but is more frequently seen in the southern part of the lake. It is rarely, if ever, exported as an aquarium fish, and would require a long, large aquarium such as one holding 180 gallons (680 liters) to be maintained properly. 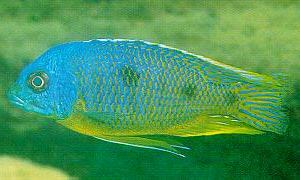 At right: An Otopharynx species of uncertain identity, resembling both O. auromarginatus and O. heterodon. The latter species typically has a larger, more rectangular, horizontally elongate suprapectoral spot and a longer snout. Perhaps this fish represents an undescribed species of Otopharynx. This male was photographed underwater at Ndumbi, Tanzania by Mikael Karlsson of African Diving Ltd. Copyright © 1997 by African Trading AB, Sweden; used by kind permission of Mr. Karlsson.