Exochochromis anagenys Oliver, 1989 (sometimes called the "Malawi torpedo"): The topmost photo above is of a live male from Lundo Island, Tanzania; photo by Ad Konings, reproduced with his permission from Konings (1995c). Lower photo above: Holotype (freshly killed), a mouthbrooding female 200 mm SL, USNM 304657, from 40-50 m depth off south shore Thumbi Island West, trammel nets. Right side photographically reversed. Scroll down for closeup of head of holotype. Below that is a drawing of the holotype's jaws to show the peculiar lower jaw structure — it appears as if the toothbearing surface is rolled outward so that the inner rows of teeth are higher up than the outer row. The tip of the lower jaw is behind the tip of the upper jaw, another highly unusual trait of this species. Drawing and all photos except uppermost copyright © 1997 by M. K. Oliver.

Mr. Hisao Masui, a Japanese aquarist with a very interesting Web site, My Exotic Blue Aquarium, has a page of photos showing variation in the coloration of E. anagenys. 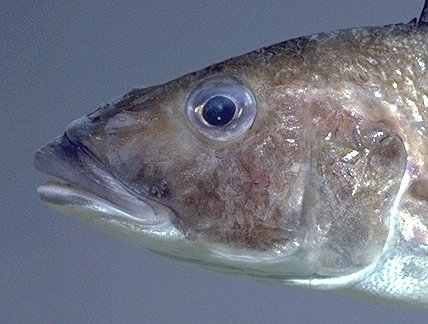