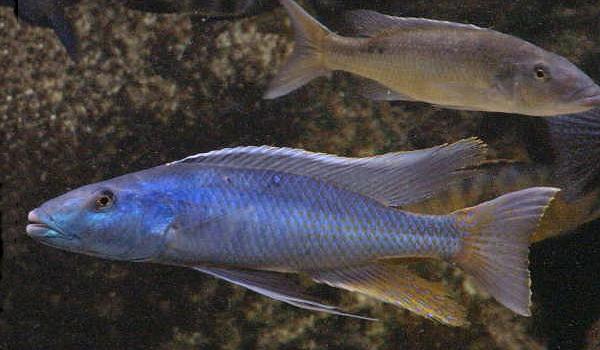 Above: The magnificent pursuit predator Champsochromis caeruleus in an aquarium. The blue fish is a male; the fish above and behind it is a female. This species is sometimes sold in the aquarium trade under the (silly) names "trout cichlid," "Lake Malawi trout," or "Haplochromis thola" (a name with no taxonomic validity). A local African name for this species, recorded at Monkey Bay, is "Nchyochyo" (Jackson, 1961). The photos are by Frank Panis, used here with his generous permission. (Visit Frank's pages at Malawi Cichlid Homepage; Frank has several pages of photos and text about his C. caeruleus, starting here.) 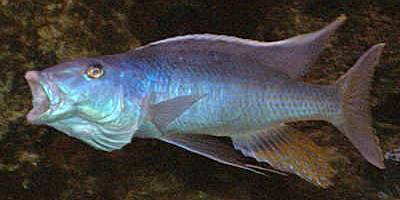 C. caeruleus is an elongate cichlid with a black oblique stripe (which is ordinarily masked in mature males). The elongated soft rays of the dorsal, anal, and pelvic fins are a distinctive feature of adult males, as seen in the photos above and at right. The teeth in the outer rows of the jaws are widely spaced, unlike those of most similar Malawi cichlids such as species of Buccochromis. In adults these teeth are unicuspid and slightly incurved. C. caeruleus can be confused with C. spilorhynchus, the only other species in the genus Champsochromis; however, C. caeruleus is more elongate. Its greatest body depth is contained 3.8 to 4.6 times in the standard length (SL; excluding caudal fin), whereas in C. spilorhynchus this depth is contained only 3.2-3.6 times in the SL.

This cichlid is found widely around the lake in depths to at least 55 m (180 feet) according to Eccles & Trewavas (1989). They report that it is particularly common in the southwest arm of the lake. Some information on its diet and breeding is given by Konings:

"Champsochromis caeruleus ... sometimes feeds on usipa [the anchovylike minnow Engraulicypris sardella]. ...it is occasionally caught by hook and line. Infrequently small schools of juveniles are seen but the species usually occurs singly once it attains a size of about 10 cm [4 inches]. Adults are rarely seen but sometimes a pair (?) is encountered in the open water.

"Breeding in Ch. caeruleus takes place on the sand in the intermediate habitat. The male clears a small pit by circling around over the spawning site and then courts a ripe female (Peter Baasch, pers. com.). If the female is willing to spawn, the pair descend to the bottom and start spawning. The eggs are fertilised inside the female's mouth." — Konings (1995c: 340-341)

Below: A drawing of a small specimen of Champsochromis caeruleus [the 80 mm SL holotype of Haplochromis boultoni, which is a (junior subjective) synonym of C. caeruleus according to Eccles & Trewavas (1989)]. Drawing from Nichols & LaMonte (1931: fig. 2).