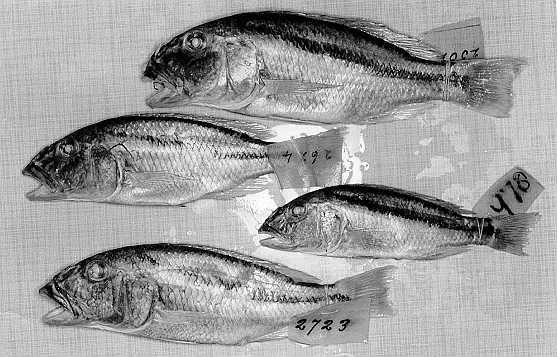 Aristochromis christyi, four of the paralectotypes (BMNH 1935.6.14:2289-2291) from the southwest arm of the lake. This magnificent predator, with the strange, beaked, widely opening mouth, is occasionally exported from Lake Malawi and does well in a sufficiently large aquarium. Photo by M. K. Oliver. Color photos by Frank Panis are available at Malawi Cichlid Homepage. A radiograph (X-ray) by M. K. Oliver that clearly shows the head skeleton may be viewed and enlarged here (as a negative image) and here (as a positive one that looks like the original radiograph). The skeleton of the caudal fin of the same individual is also illustrated here (as a negative image) and here (positive).