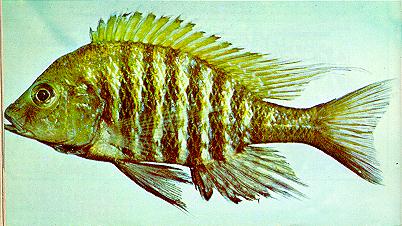 Above: The holotype of Alticorpus peterdaviesi, an adult of unspecified sex but apparently male (125 mm SL; USNM 210639), trawled off Monkey Bay, Malawi in 43 fathoms. Photo by Dr. Herbert R. Axelrod, from Fig. 1 of Burgess & Axelrod (1973); reproduced with the permission of T.F.H. Publications, Inc. NOTE: In the photo, the tips of the jaws were cut off at the edge of the magazine page, as reproduced here. This species was originally described in the genus Trematocranus.